Whether christened Tom or John, the Collins family of drinks dates back to the early 19th Century. They are essentially individual servings of a cool gin punch made popular at London’s Limmer’s Hotel by headwaiter John Collins some 30 to 40 years before civil war broke out in America.

Nevermind that Collins didn't actually invent the punch (in his 2010 book Punch, historian David Wondrich gives that honor to Stephen Price, the American manager of London's Garrick Club). To this day, a concoction of gin, lemon juice, some sweetener, and cold sparkling water bears the headwaiter's name. Well, his surname, anyway. 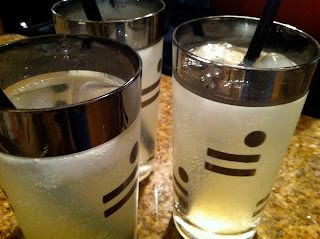 Variations on the drink — Bootsy, Barnabas, vodka, and Michael Collinses — came later. To this august and suspect list, I add my own: the Marshmallow Collins.

Several months ago, I wrote about my experiments with marshmallow syrup using the shredded root of Althaea officinalis, that is, real marshmallow plants rather than candy marshmallows (see below for link). At the time, I wrote


The cut root I purchased was perfectly dry and felt like any other root or shredded bark. But wait. In water it became mucilaginous; a thick, colloid, almost ropy syrup formed as the infusion sat overnight. Dry, it had just the faintest musty smell. Once it got wet, the smell was, well, rooty. Seriously. Smelled like someone had been digging up the garden.

It's a difficult syrup to work with. Not because of its thickness and tendency to stick to itself — which, admittedly, is a little odd — but because of its inherently bosky taste and smell. I happen to like it, but I don't like the way it mixes with whiskey. Gin is another story.

So when one of the boys suggested a round of Marshmallow Collinses last night, I smiled and let him put together a batch. Here's how we ended up making them:

Combine the gin, lemon juice, and syrup in a shaker full of ice. Shake to combine and chill. Strain into a tall glass full of ice. Stir briefly, top with soda water, and serve.