In 1961, American humorist Bennett Cerf attributed the creation of pink lemonade to Peter Conklin, a concessions vendor in Mabie's Mighty Circus some time in the distant past. Faced with a water shortage on a hot day when demand for lemonade skyrocketed, Conklin raided a tub filled with water in which the circus’ fat lady had washed her red dress. A little sugar, some tartaric acid to fake the lemon and — viola — pink lemonade1.

It’s a fun story. I’ve also heard it was her bloomers. Or a red horse blanket. Or pink riding tights. Once immensely popular and as American as apple pie, pink lemonade was indelibly linked to circuses and roasted peanuts but the story of its accidental washtub creation is just a little too tidy — and sufficiently risqué — to hold water. It sounds like a story for rubes and marks. For a more satisfying take on early examples, turn to another storied American institution: the saloon. 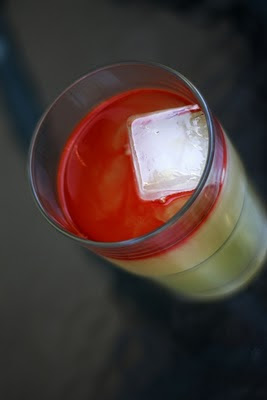 Early bartender’s manuals include dozens of recipes for lemonade — versions with seltzer, with claret, with port, with sherry, or with the almond-and-orange flower syrup orgeat abounded. If a customer asked for lemonade “with a wink” or “with a stick in it,” he’d be getting a jolt of whiskey. The same customer could get lemonade shaken with an egg. One could even belly up to lemonade with milk or cream — although these were generally strained since lemon juice curdles cream and Cement Mixer shots were as yet not in vogue.

Some of those fancy lemonades — especially with claret and port — could range anywhere from pinkish to purple, but flat-out pink examples could be made with a range of syrups, tinctures, and bitters. Strawberry, raspberry, and grenadine were popular syrups, but cinnamon and cochineal (a red tincture derived from a Oaxacan scale insect) saw some action as well. One might swap out tea for the water (sorry, Arnold Palmer: you weren’t the first) or add a bit of phosphate.

That’s all well and good, each refreshing in its own way, but I prefer the complexity of lemonades spiked with bitters and more than a few cocktail bitters turn lemonade a blushing hue. Recipes for Angostura Lemonade, for instance, appear in early manuals such as Frank Meier’s The Artistry of Mixing Drinks (1936), George Kappeler’s Modern American Drinks (1900) and J.A. Grohusko’s 1910 classic Jack’s Manual.

Angostura bitters do indeed lend a hue to the drink that suggests pink, but there’s no denying the roseate blush brought on by a dose of the old New Orleans standard, Peychaud’s. Most bitters I’ll stir right into the lemonade, but the bright red Peychaud’s makes a striking float. Eventually, I stir it in, but there’s something almost seductive in a crimson slick, sending down little tendrils of pink melting ice causes the drink to swirl just a bit in the glass, reminding me that — at the moment — I’ve got nowhere to be.

Kappeler calls for a modest three dashes in his version. Others bump it to a teaspoon per serving. I’d say the final balance of sweet, sour, and bitter is up to your individual taste. Play with the proportions to come up with a formula you like, but here’s what I’ve been doing:

Shake the lemon juice, water, and syrup over ice. Strain into a highball glass over fresh ice and top with a float of bitters. Serve with a spoon.

One may also put a stick in it, though I'd ease off the water if that's the path you want to take. Other bitters that won’t pink your drink, but are worthy additions to a bittered lemonade:

I was thinking of you, Matt Rowley. I spent some time with a glass of eau-de-vie of yellow gentian, illicitly brewed, natch. In France, they brew them all night long on Christmas eve, in the most isolated spots, because there's an unavoidably strong, ehm, perfume. Illicit or not, the good stuff's quite expensive, as the government taxes it heavily since it's from the roots rather than a fruit, and it all takes such a massive amount of work. There was a long, rambling explanation about the taxing that got lost somewhere in the bottom of my glass...Really potent digestif. Have you ever tried it?

I have indeed had gential eau de vie. Potent stuff, and not to be trifled with. I'm curious, if it's illicitly concocted, why it's particularly expensive. Seems like taxes shouldn't be a factor at all. But then, French isn't a language that comes naturally to me, and the ways of the bouillers de cru are mysterious. Fantastic image comes to mind, though, of the Christmas eve production. I'd love to get together a trip back to France for some more field work...

I've made lemonade with buttermilk. Since the buttermilk is acidic, the lemon just adds flavor. If you try it make sure to buy real buttermilk like Kate's Buttermilk. The pasteurized, dime-a-day buttermilk works as well. but doesn't tastes as good.

In older books, one tends to find a lot more lemonade recipes than today. Those made with milk are sometimes called "English" or "Italian" lemonades in American cookbooks, but buttermilk is an unusual way to go. How do you make yours?

Caroline ~ I don't know the answer to that one. Drinks "with a stick" are certainly 19th century, but how much older is the expression than that? I'll do some more looking into it. I probably picked up the expression from my grandfather in St. Louis in the 1970's, but have heard others use it lately as well. Notably, Greg Boehm, publisher of Mud Puddle Books, used it in a talk last year at Tales of the Cocktail in New Orleans. If I'm able to track down anything definitive, I'll let you know.