Pink Lemonade II: Charlatans at the Circus, Racetrack, and Church 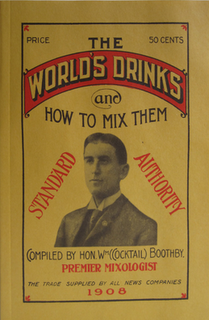 Earlier this week I mentioned how I make pink lemonade. Same way as pink gin: with cocktail bitters. That’s just one way, though, and older bartending manuals include many ways to make the drink pink. In 1908, the Honorable William T. (Cocktail) Boothby published The World’s Drinks and How to Mix Them. He addresses the pink stuff under the heading Circus Lemonade.

A casual glance at the recipe suggests that Boothby is an old-school charlatan, but he’s actually getting in digs at unscrupulous vendors at circuses, fairs…and churches.

Shocking—A bartender pointing out ecclesiastical lemonade hypocrisy. His method of adding raspberry syrup's not a bad drink, but ease off the sugar if that version tempts you.

This drink in a barroom is a Plain Lemonade colored with raspberry syrup; but a proper Circus Lemonade is a beverage that is made to sell at large gatherings, such as services, fairgrounds, race-courses and church affairs, and is made in the following manner: —

Procure a large tub or headless barrel and fill it nearly full of water, add enough citric or tartaric acid to suit, and sweeten to taste with sugar. Two pounds of acid will make over 30 gallons of lemonade. Cochineal coloring…will make it a beautiful red color. Always slice up a few lemons or oranges and throw in. If you have no ice handy with which to cool this delightful beverage, procured a piece of glass and fasten to the sides of the barrel with strings, so it will float near the top, and put some of the sliced fruit on it. This little deception causes the drink to appear more inviting on a warm day. A strawberry is usually added a church fairs, and two or three berries might possibly be used for a picnic.

Honestly, I think any drink that is called "Circus ..." and is served in a barrel is a wonderful idea.

A midway Manhattan? Perhaps a Sideshow Sidecar.... this circus thing can really go on.

Blair, you are hereby tasked with creating the Ringmaster Rum Barrel. Make it rum, make it red — just make sure 17 clowns don't bust out when I sample one at your Tales session.

Circus tiki crossover drinks. It's a whole new category and it's all yours, babe. Go go go!