Everywhere else, as they say, yesterday was just Tuesday. But here in New Orleans, it was Mardi Gras. 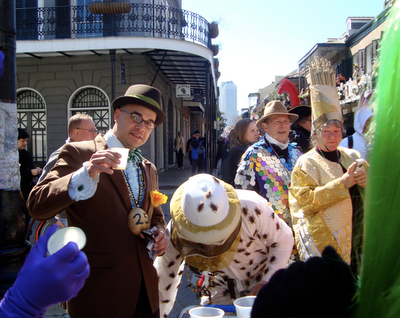 After making it through the Zulu crowds, I walked through the Marigny where I planned to catch up with the costumed revelers of the Society of St Ann, one of my favorite parades. St Ann is a rambling, stomping, great time. Unlike the huge parades uptown that make their way to Canal Street, this is a long band of motley, bawdy locals and hip visitors dressed up in costumes that range from the expected (hey, I saw that grinder monkey last year) to the topical (lots of Saints references). The crowd grows as it moves along from the Marigny to the French Quarter and picks up new characters.

On the way to R Bar, a sort of St Ann ground zero, I ran into Times-Picayune restaurant critic Brett Anderson. We shared a drink with his lovely girlfriend and moved on. Once in the Quarter, bon vivant bar tender Chris Hannah saw through my mask and offered a drink. Chris had a cooler filled with Chief Lapu Lapu, one of my favorite tiki concoctions. Made with Cruzan and Smith & Cross rums, it was just the thing. 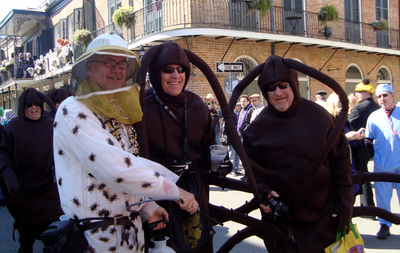 And who was that in the Nagin-B-Gone exterminator outfit? Why, it’s that charmer Wayne Curtis dispensing Sazeracs to the crowd. First a squirt of bitters from the spray bottle, then a dose of Old Overholt from the pump dispenser.

Even the crowd of human-sized cockroaches couldn’t say no.
Posted by Matthew Rowley at 9:38 AM

love waynecurtis's costume. what kind of mask were you sporting? hmm next time i see hannah i will ask him to fix me that drink.

It was Mardi Gras at my house!

Well, as much of a Mardi Gras as a transplanted Midwestern, ex-Lutheran can muster.

Kindviet ~ you should. It's a keeper. and a toter.

Erik ~ It was Mardi Gras in the hearts of all those who've ever loved New Orleans wherever they were. Good catch.

Ah! I was wondering if Mr. Ellestad would find this post. Spray and squirt Sazerac for #28? ;->

Just to correct the record: It was Herbsaint in the spray bottle (two quick mists), followed by a more extended application of rye/brandy/peychaud's/angostura/simple syrup from the pesticide sprayer. Quite efficient, really. I should look into a patent.