You may think that cocaine unicorns are the world’s most amazing mashup, a synergistic commingling rising to unparalleled heights of awesomeness. You’d be wrong. 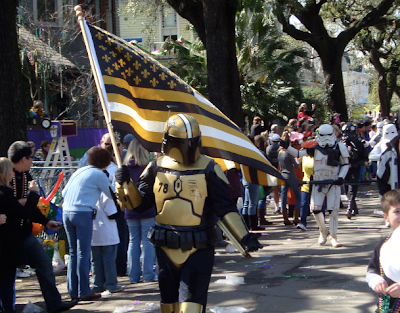 What you would have failed to consider—and, to be fair, like me, you might not even know such a thing even existed—is Boba Fett. But not just any Boba Fett: a black-and-gold Boba Fett adorned with fleurs-de-lis and waving an American flag in the Who Dat Nation colors. Right there on St. Charles Avenue.

Yes, I’m in New Orleans again. Have been since before the Super Bowl. Will be ‘til next week. While I’ve seen some unforgettable sights in Mardi Gras parades before, I’d never seen the 501st Legion marching in the Krewe of Tucks.

The 501st—otherwise known as Vader’s Fist—is a band of dedicated Star Wars fans whose detailed costumes speak to endless hours of research and handicraft or thieving from Lucasfilm’s costume department. There were Jedis. There were jawas. Armored storm troopers marched in columns while the Imperial March cranked from speakers.

And when Darth Vader’s float came into view? Oh, forget about it. Vader, riding with a beer-drinking Jedi and buxom jawa, waved, shook hands, and handed out toys. Santa Claus himself could not have driven the crowd to greater frenzy.

Well, maybe if he were being pulled along by flying cocaine reindeer.
Posted by Matthew Rowley at 9:23 AM

That sounds un f'n believable. WIsh I coulda seen it with you.

It was one of those great Mardi Gras scenes when everyone in the crowd was just so clearly loving life and everything it threw at them. Even evil Sith lords and bounty hunters.