Every few months, I put up a few jars of mixed pickles for my lunches and occasional dinner if we’re grilling burgers or brats. Recently, I’ve begun spiking those batches with the Jamaican allspice liqueur called pimento dram. The change is good. 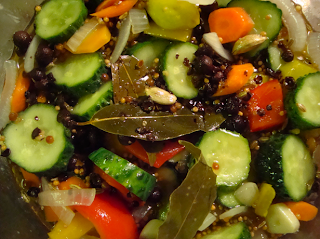 Pimento, as allspice is known in Jamaica, is the berry of a Caribbean myrtle tree (Pimenta diocia). It’s one of the few spices native to the new world and—in the US, anyway—is often included in baked desserts. Those who know it in cocktails, however, or in the cooking outside the US understand its savory role well. In fact, it’s responsible for the characteristic taste of Jamaican jerked chicken and pork, and can be found in sauerkraut, ham brines, pickled fish, jugged hare, picadillo, and Indian curries. I’ve also used it in shrimp ceviche and bread & butter bar eggs.

Here, I used a dose of it to oompf up our house pickles. If you don’t have any pimento dram on hand, you can either order some from Haus Alpenz here, substitute lightly toasted and barely cracked whole berries…or see Paul Clarke’s directions for making your own here at the Cocktail Chronicles.

Trim ends of cucumber and slice each into thick coins (about ½” thick). In a stainless steel or glass bowl, toss sliced cucumbers and salt. Mix gently but thoroughly. Refrigerate cucumbers and salt for 1-2 hours.

Drain and rinse the salted cucumbers under cold running water.

Meanwhile, heat the olive oil in a large non-reactive saucepan, then sauté the carrots, onion, garlic, and bell pepper pieces at medium heat, stirring occasionally, until the vegetables begin to sweat and just begin to soften—about 5 to 10 minutes. Remove from heat and set aside.

In a small frying pan, dry roast the mustard seeds, coriander seeds, fennel seeds, cardamom pods, and allspice berries (if using) over medium high heat just until you hear the seeds begin to pop. Transfer to a medium nonreactive pot. Break the cinnamon and lightly toast it. Add it with the remaining syrup ingredients to the pot and bring to a boil. Reduce heat to a simmer, stirring until the sugar dissolves.

Add the cucumbers to the vegetables in the large saucepan. Toss gently to combine. Bring the pickling syrup back to a boil. Pack three large preserving jars with the vegetables. Add pimento dram (if using) to the syrup, pour the hot liquid over the vegetables, and seal the jars. Set the jars aside to cool. Once cool, refrigerate.

Yield: slightly less than 1 US gallon/4 liters
Posted by Matthew Rowley at 12:30 PM

Sylvan and I were just trying to figure out what to do with all this Pimento dram we have. We made a drink that Chuck invented, the Reveillon, which is very tasty. But I'm more of the culinary one in the house and like to experiment with all the homemade syrups and liqueurs we have around the house. I'll have to try these pickles!

1) a nui nui
2) beef stew
3) Jeff Berry's Ancient Mariner
4) another nui nui
5) all the syrups for a nui nui, combined and drizzled over ice cream or full-fat, Greek yogurt.

I made what I expected to be a two-year supply of pimento dram about ten months ago. After getting into the nui nuis, we're down to about 8 ounces.