Tomorrow night, Uptown Billiards Club in in Portland, Oregon is hosting the 2nd Annual Northwest Eggnog Competition. I'll be down in San Diego, but it sounds like area alcoholists, including Craig Hermann and Jeffrey Morgenthaler, are already gearing up and will be attending the best eggnog throwdown. 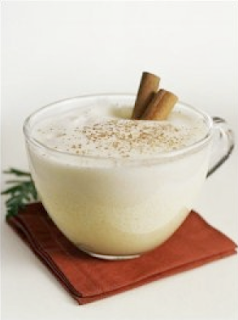 If I were anywhere within 40 miles, I'd be there.

As a side to this event, I've got to share this email I got from my buddy Barry. Barry lives near Elephant's Deli, so I called him today to let him know about the event, but also that I didn't yet have all the details.

Now, Barry uses Google's voicemail which also sends him an email with the (supposed) text of the call. I left him a message this afternoon suggesting that he check out the eggnog competition. Didn't know the details other than Morgenthaler tweeted about it. The gist of the message was to look into it because I was going to be in San Diego, didn't have any more info than that, and I didn't want to send him on a snipe hunt.

I busted out laughing at the worst transcription job I've ever seen. This is the complete gibberish that Google sent him as the text of my message:

Hey. It's Phil Shay are you talking about and I just remembered something on the road earlier in the week in Portland atthe post club. Olson's Deli which, I think it's just like of spring away from you tomorrow night. We're having some kind ofPortland bartenders. 8. Not competition and Jeffrey, Morgan dollar will be there. He's a bartender. Clyde common andhave a good point, and several others at least 10 times. I'm not sure which, but it sounds like something that might bekinda fun to do this. It's indeed. That's where it is on another LSATs telling them somewhere and he's got some free time. Idon't know what it is. I don't know any details that would you expect all at home and it's 7 a goes on facebook on 7 mycomputer and tomorrow so I'll be offline mostly for a week or so. Yeah, so give us a while and really do talk to them, cosI'm guessing I was just like swamping doing to our last time when you called. So that's why I was referred, but he's did alot of the virtual church on it. So with the lose of the pros and cons and I haven't had any problems so far as I can, I'd. I'ddefinitely love it and let me point out, it's because I know I have to the pickup the canoe colossal at. If you could. That'spretty cool. So yeah. Catch you later. Bye.

Posted by Matthew Rowley at 9:57 PM

This was a lot of fun - thanks for the heads up

Glad you had a good time. Wish I had made it myself: lord knows I need to sample 8,923 calories of boozy goodness.