Bad news, everyone: I’ve been laid off.

Damn. Advertising exec was one of the coolest jobs I’ve ever held. Smart coworkers, great clients, challenging and rewarding work, right on the coast—almost a dream job. Until clients’ advertising budgets started circling the drain, that is.

The layoff isn’t the morale-crushing, bank-busting defeat it might seem. I’ve been boning up on Spanish; refamiliarizing myself with French, Dutch, and German; traveling; giving talks; learning basic HTML; reading voraciously; and working on a new book (three, actually—two have legs and one is a back-burner vanity). Freelance gigs the pay the bills. I’m concerned, but not panicked.

The effect is, however, increasingly evident in our cocktail hours. And so, as an experiment for the 36th Mixology Monday and its hard-times theme, I’ve stopped buying liquor. 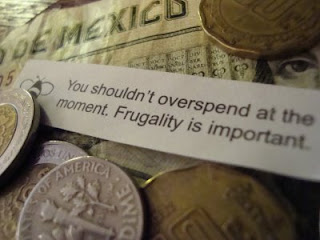 That’s right: In the last two months, I haven’t bought a single bottle of liquor other than a liter of Bombay Sapphire at the Tijuana duty-free shop. Instead, I’ve tapped our sizable collection of rums, whiskeys, brandies, and miscellaneous spirits, finishing some bottles and cracking open others I’d been hording. For war, apparently, or perhaps another Prohibition. In more ways than one, the layoff has forced me to take stock of what I’ve got and to use it.

I haven’t drunk so consistently well in years. 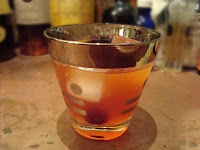 If getting laid off sparked this experiment in liquor frugality, a Buddhist cook inadvertently shaped it. See, there’s nothing particularly hard-times about the ingredients themselves for this month’s contribution, the North Park Cocktail. It’s how they came together once I was laid off that resonates with the theme.

This Buddhist cook once explained that he began each day by emptying all his kitchen cabinets and cleaning every single bottle, jar, and bag. This daily tedium served two purposes. Obviously, the regular wipe-down kept his larder organized and clean. The underlying benefit was that, by handling every container every day, he maintained a precise mental inventory of quantities, conditions, and patterns of use.

Turns out that this is a rewarding way to approach liquor cabinets.

Pulling everything out every day would be a little OCD, but once a week, I pick up each bottle of rye or absinthe or gin or apricot brandy or whatever and give it a dusting. Of our hundreds of bottles, those dwindling past half-capacity get earmarked for accelerated consumption. I can tell you exactly what we have, where it is, and how much there is. Cocktails suggest themselves much more readily when I know without looking what’s available. 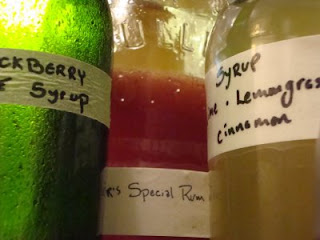 Last month, I turned that gimlet eye to the refrigerator. Although the fridge was jammed with bottles of homemade syrups, jams, marmalades, and other creations intended for the cocktail shaker, I’d forgotten making more than a few. Once forgotten, they languished. Those that had lost their scents, their taste, their oomph I pitched. I consolidated others, cleaned the shelves, and can now see the back of the box. Every bottle and jar is getting used now, if not in cocktails, then as ingredients and condiments for meals.

Without spending an additional dime, I’ve made smarter use of existing resources by knowing exactly how much of what I’ve got. Vermouth, in particular, gathers no moss around here. The cocktails have been fantastic: bijoux, Hoskins cocktails, dozens of tiki drinks, Martinez cocktails, cocktails that incorporate generous doses of herbal concoctions such as Benedictine, Chartreuse, and Averna. Absinthe cocktails. Sours and highballs and squirrels.

I wouldn’t say thank you for laying me off, but better understanding the riches we do have makes me perversely happy. 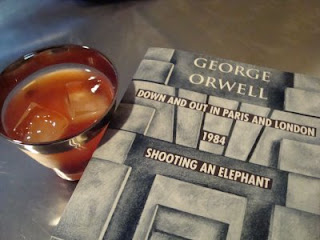 Now, despite my general affection for cocktails, it’s not for nothing that this blog is called my Whiskey Forge. I’m a fan of whiskey and of those who make it openly or in secret, but the world would be a darker place without bourbon. Booker’s, Old Fitzgerald, Evan Walker, Four Roses—all fine or even sublime in their own right and all are getting tapped as we systematically work through the shelves.

One of the most consistent Kentucky values out there, though, is Bulleit Bourbon. At 90 proof, it’s what I drank to assuage the pain of lopping off chunks of my fingers, it goes into my mom’s Manhattans when she visits, and if I had a dollar for every bottle I’ve bought…we’ll, I’d score a few more bottles once I start buying booze again. F. Paul Pacult over at the Spirit Journal gave it a “superb” rating and I’m right behind him. The grain bill’s high rye proportion is part of the appeal to me, but the sound of the cork popping out of its bottle always brings just the barest little smile of anticipation.

$23-26 per 750ml, good ol’ Trader Joe’s sells it every day for $19.99. That’s a deal whether you’re fully employed or—like me—willfully misapplying a little zen to the world of liquor.

A bittersweet cocktail, swimming with heady notes of orange, corn, rye, and spice. Get you some.

Shake with ice and strain into an old fashioned glass with 2-3 fresh cubes. Garnish, if desired, with a single whiskeyed cherry.

Notes—The name comes from my neighborhood in San Diego where I've only recently discovered little gems that had been here all along. The Bulleit was free (thank you, Tom, Mike, and Gillian); the Aperol had been hidden in the fridge; both vermouths were open and would fade if left unused; for the Don’s Mix, the grapefruit was a gift and the fragrant cinnamon sticks were bought way cheap in bulk from a nearby Middle Eastern grocer last Autumn; and the garnish is from a batch of cherry bounce I put up more than a year ago with about two gallons of, yes, Bulleit.

Here's my post, complete with photographic proof of cost compliance