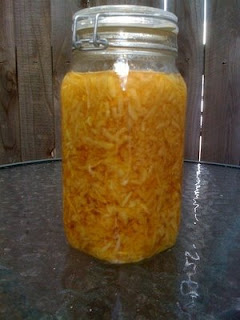 They dined on mince, and slices of quince,
Which they ate with a runcible spoon;

~ The Owl and the Pussycat
Edward Lear

Fill a bowl with quince—hard, knobby little buggers—and their heady aroma will perfume an entire room. The smell is distinct, but tricky to nail down precisely; it’s something like guava mixed with ripe pear or occasionally pineapple. It’s that exotic, old-timey smell tempts me every year to do a quince-and-liquor mashup. Vodka, moonshine, brandy, cognac, and whiskey all yield tasty results, though neutral spirits seem to want more spices added to the mix. I’ve yet to try mixing them up with rum.

In German, quince are called Quitten and, when fermented and distilled, known generically as quitten brand. They are, frankly, a pain in the ass to distill for they must be de-fuzzed of their grey downy mantels and even then yield little juice. But the samples I’ve had are sublime. I strongly encourage each and every still owner to make homegrown quince brandy.

No still? No problem. You can still wrest some of those elusive aromas and taste from these fruits by cold infusions. Here’s what I’m working on now. 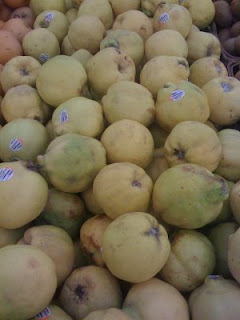 —Champion, Orange, Pineapple (the most prominent at market and one of the more heavily scented examples), Smyrna, and Van Deman. We’re near the tail-end of the season now. They all look a bit like malformed yellow pears, and about the same size, though some can grow to into grapefruit-sized monsters. When I stumbled across a bin of them for $0.69, I snagged a load.

Raw, the hard and puckery quince are practically inedible. But cooked, most turn a dark crimson and may become the basis for toothsome little sweetmeats such as membrillo (Spanish quince paste, a nice foil to sheep milk cheeses) and pâte à coing (dark red and sugar-encrusted squares and cubes of French quince).

Me? Come on, now, you already know this: I put ‘em in liquor.

For the past week or so, I’ve given a daily shake to a two-liter jar of shredded quince and Jepson Rare alembic brandy. Two sticks of cinnamon are jammed down in there, too. The goal is that 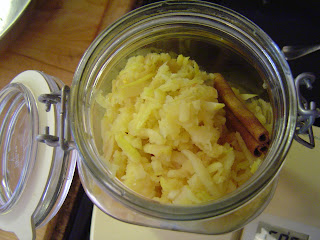 within six weeks I’ll strain off part of the liquid and have a quince-infused brandy for adding specifically to my sidecar cocktails. Maybe with an unorthodox hit of noyau. At some point after that, I’ll strain the remainder, add some palm sugar syrup and have a nice little quince cordial in time for the autumn. This is one cordial that bears a long maturation.

For the base infusion, I washed and thoroughly de-fuzzed four quince, then shredded them with a grater, pitching the hard woody little center with the seeds. This yielded about 700g of flesh. Into a 2-liter jar with two cinnamon sticks and 750ml of brandy. Keep it in a cool, dark place and shake-shake-shake now and again. Age at least six weeks before straining off for quince brandy. For a cordial, strain off the shredded quince and add a sugar syrup to taste, then age at least six months to let it mellow and go all velvet at the edges.

Hey Wade ~ No, I don't add sugar to this, but you could without any problems to make a quince cordial. The main reason I didn't is because I wanted a drier maceration I could use easily with cocktails and then use syrups to balance the sweetness depending on what else I mix in. As it turns out, we use this almost exclusively with lemon and Cointreau to make quince sidecars. Man, we burn through them, too. I'll also rim the glasses with sugar that I've pulverized with cardamom. About as fancy as I get with garnishes, but it's a great combination ~ and one more reason to lay off the sugar for this particular drink.

Mulberry and brandy with sugar, eh? The French make a similar drink: crème de mûre. How do you make yours?