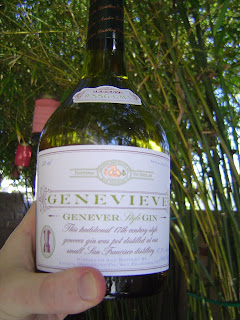 …don't quit your job, but do make whiskey and genever.

~ David Wondrich, out of context
The last time I started writing about Anchor’s Genevieve, I ended up mangling my left hand. Here’s to keeping knives sharp: catch my fingers in raking light and you can tell where parts are missing, but I’m amazed at how well they’ve healed. Understandably, I haven’t been keen to approach these tasting notes since I felt they needed to be accompanied by a recipe that called for wielding the same knife.

Ah, but what the hell.

Anchor Distilling in San Francisco has made a limited release of a Dutch-style genever (also spelled jenever in Dutch) called Genevieve. Make no mistake: this is cause for celebration, not just among cocktail geeks whose clamoring for the stuff only hit fever pitch after the publication of David Wondrich’s Imbibe!, but for spirits enthusiasts in general and expat Dutch who have groused about the imports recently available in the US.

A little background: Genever is sometimes called “Dutch gin” but that’s a misnomer. While it shares some qualities of gin—notably a healthy dose juniper berries as flavoring—calling it Dutch gin is akin to saying a mint julep is akin to a mojito “only it has bourbon.” There’s more to it than that. It’s the gastronomic and cultural precursor to gin, the drink on which English distillers based their famous spirit. As such, it’s an earthier, less refined-tasting spirit. I once wrote that I’d kill someone in his sleep—in front of his mother—for a regular supply of good genever. A minor exaggeration. Seriously, though. In front of his own mother.

For our purposes, genever can be separated into two primary categories; old-style (oude jenever) or newer-style (jonge, or “young” jenever). The names have nothing to do with the age of the spirits, but with the manufacturing process. Oude jenever methods predate modern distilling techniques that allow for greater separation of ethanol from other flavorsome components in a still. Pot-distilled oude jenever, therefore, is heavier, tasting more of malted grains. Jonge jenever, on the other hand, may be made with sugar from beets or molasses and only a small portion of the moutwijn (“malt wine” in Dutch) that characterizes an oude jenever. Korenwijn ("grain wine" often translated as "corn" wine, but not necessarily made of maize) is a third category that helps inform our tasting and we’ll get to that in a bit. 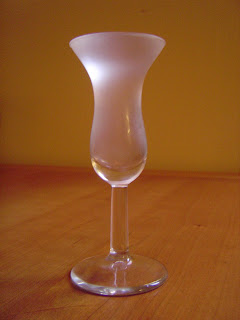 I started off by pouring Anchor’s 17th-century style oude jenever two ways: room temperature and straight from the freezer. Each dose came in a small traditional schnapps glass known as a borrel or tulp (for its tulip shape—tulp in Dutch).

The nose is unmistakable. My regular sidekick, Dr. Morpheus, studied oncology at the University of Groningen in the Netherlands and his reaction was immediate and the same as mine: “Yep, that’s genever.” Score one for Anchor.

Looking like any uncolored gin, vodka, or white rum, the spirit is clear but has a slight oily sheen that glistens on the surface. Chilled, it gets a noticeable haze. Both room temperature and ice-cold, Genevieve’s taste is strikingly different from the American and British gins you may know. It’s got a round, full-bodied feel to it and a delicious nose-crinkling funk. The base grains—especially rye—pop. I love that. They even hit my nose before I took my first sip. Score another.

My favorite way to have jenever is straight up and chilled. If you're going Dutch, you can serve the borrel filled to the brim. In fact, when it's filled just barely bulging over the brim, the surface tension keeping it in the glass, it's what's known as a kamelenrug (a camel's back). Genevieve does nicely here. Bitterballen, the classic accompaniment, are little meatball-sized croquettes found throughout Holland, but rarely in these parts. Stay tuned: recipe's a-comin'. [edit: recipe is posted here]

For those who want to try their hands at recreating 19th-century American cocktails, this is a fantastic gin to incorporate in your drinks cabinet. In fact, that’s what Wondrich exhorts drinkers to do in Imbibe! Modern gins, he explains, are too light and crisp to properly capture the experience of the types of gins available in the US prior to the late 1800’s. See recipes at The Cocktail Chronicles and The Underhill Lounge.

There’s a bite, though, to this spirit, a hotness that I’m not wild about, that catches at the back of my throat. Don’t get me wrong; I don’t hate it. Far from it. But I did pull a little moue at the taste of what I found to be the lone fault of the spirit itself.

This is such a good product and I am delighted to have (about half) a bottle, but I can’t help think that putting some of the Genevieve up in oak barrels would do wonders to round off the rough edge (surely 17th century spirits were stored in barrels—I’ve seen the gaugers’ pocket vademecum guides that allowed excise men to estimate their capacity). Korenwijn, which I mentioned earlier, is in the same class, but is often aged in wood. That could be what’s called for here.

Kudos to Fritz Maytag and the distillers at Anchor for putting out Genevieve. If you can score a bottle, do it. At around $30 retail, two is better. Keep one in the freezer at all times. I’ve only seen one bottle at a bar in San Diego, but it’s around San Francisco and Los Angeles. New Yorkers seem to have the best luck finding it on retail shelves. I was in Kansas City twice last month. Nobody's heard of it there.

If you live in KC, or any other place with no retail access, order Genevieve online.

I know this post goes back to 2008 but I was wondering if you have tried Diep9 Genever. We import it from Belgium, the first of it's kind to US soil. It came to the East Coast 2011 and just recently to Portland OR. I would love to get your thoughts on the product.
Kristina

I've heard of Diep 9, but haven't sampled it yet. Feel free to shoot me an email: moonshinearchives (at) gmail (dot) com and we can chat some more. I'll be in Holland (yes, I know, it's not Belgium) for the better part of a week this summer on a genever-drinking and book-buying trip. It'd be nice to compare with some of the offerings in the area.