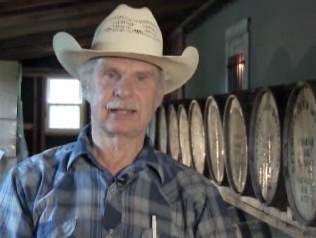 
We're making a traditional American product
and preserving a little bit of America as we do it.
~ Chuck Miller
Master Distiller
Belmont Farms

What a difference a few days makes. Wednesday I was in steamy, sultry New Orleans, the culmination of a week of work for the Museum of the American Cocktail and looking into the local distilling scene. This morning, I woke to the sight of the Hollywood Hills from fifteen stories up at chichi hotel. The panoramic view is impressive, but the breakfast hardly compares...

In catching up on the emails, I saw that Chuck Miller is in the news. Mr. Miller makes corn whiskey in the Appalachian tradition at his distillery in Culpepper, Virginia and has been doing so legally for about twenty years. His Virginia Lightning is pure corn liquor, unaged. The Kopper Kettle is a newer development made with corn, wheat, and barley, pot distilled, then then aged on oak and apple woods.

Miller was one of the pioneers that has fueled today's uptick in interest in American folk distilling and about four years back, I was fortunate to interview him for a section on legal distillers in my book Moonshine.

One of the points I was trying to make at the time was that, while I know full well that most of the distillers I've met have no intention to go into licensed production in part because they eschew even the idea of selling their makings, some had gone legit or were exploring the process precisely because they saw a business opportunity. Getting properly permitted is neither quick or cheap, but microdistillers across the country are (finally) doing it and starting to turn out vodkas, whiskeys, and gins in quantity.

Voice of America broadcasted a decent short piece on Miller (available here). So cheers, Chuck, for preserving a little bit of American tradition.

Posted by Matthew Rowley at 7:46 AM