A Week of Zeke: Day One 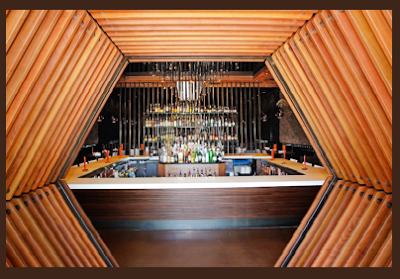 (Starlite, San Diego)
You made a yummy sound.

~ Gene Wilder in Young Frankenstein
I’ve been quiet lately. Not just because of work, but also because we’ve got a houseguest. Our friend Zeke has come from Philadelphia where he’s a cheesemonger at DiBruno Bros, an Italian Market cheese store that’s been around since Mussolini was in power (in fact, if you know where to look, you can even find a photo of il Duce hanging in the back of the store).

Zeke and I share a lot of tastes. Music? Eh, we like some of the same. Skating? You’d never find my old ass on a skateboard (the phrase “greys on trays” comes to mind), but him? He’s already replaced his board's wheel bearings since arriving. Food and drink? Now there, we could’ve been separated at birth. The last few days have been filled with eating, drinking, smoking a stogie or two, and catching up on old times.

As an introduction to California, I took him straight from his flight to Starlite, a San Diego lounge that’s right on the way home from the airport (if you take a short detour, go under the overpass, and scoot down India Street, then take that little dogleg into the parking lot along the side of the building).

Starlite gives lie to the notion that you can’t find well-made cocktails in San Diego—an untruth in any event, but with enough kernel of reality to make me a little sensitive when I hear it. This place is almost like a private clubhouse and, from the outside, you’d never know what treats lie within.

Over several hours of yakking and talking with co-owner Matt Hoyt, we managed to sample an old fashioned; a Dr. Noggin (which a quicker wit might have named an elder fashioned); a Kentucky Colonel with cherry-vanilla bitters; that New Orleans favorite, a Sazerac (with Sazerac rye and Peychaud bitters, naturally); two local ales; a Maple Hill 23-year old rye, and, the hard-to-track-down-in-these-parts Pappy Van Winkle 23-year old bourbon. Ambrosia.

To go along with all these, we had some house-made sausage with sauerkraut, salami, some bresaolo (a dark, air-cured beef eye of round, sliced as thin as a dime), cicciolo (a rough, fatty, course-cut potted sausage, somewhere between a country pate and loose-textured coteghino), pickles, toasted bread, and, a treat that Zeke brought from DiBruno Bros, about a half-pound of mole salame made by Armadino Batali (yeah, Mario’s father) in Seattle. The kitchen was nice enough to slice down for us. We shared, of course, with Matt, the chef, and our bartender.

Do yourself a favor and pick up, well, any of Batali’s cured meats from his Seattle store, Salumi, but don’t miss the mole salame—air-cured and flavored with chocolate, cinnamon, ancho and chipotle chiles. Yeah, I know. Sounds weird. It ain’t.