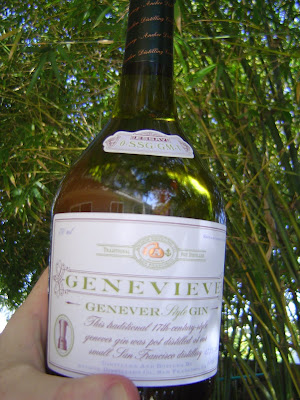 Now, it is not true, as it's been alleged, that my baby bottle was a stone crock of Dutch whiskey with a rubber nipple slapped on top. But it's no secret that the fruit of the still has long held a particular allure for me. I will always champion distillers small and large who put out quality products. The smile on my face this week, however, threatened to split my head nearly in half. Anchor Distilling, authors of Junipero Gin and the Old Potrero whiskeys, has developed a pot-distilled American genever called Genevieve.

A say what? You heard me, an American genever. Also known as Hollands or Schiedam (even, incorrectly, as "Dutch gin"), genever or jenever is a malt distillate flavored with juniper berries.

I came to appreciate the drink while in Amsterdam during my days as a museum curator. Bart Cuperus, who, along with Joop Witteveen and Johannes Van Dam, founded the collective library of cookery books known as De Stichting Gastronomische Bibliotheek, introduced me to varieties, glassware, and ways to serve the drink. At the time, it had a reputation akin to bourbon in the United States—an old man's drink, but enjoying a renaissance among a younger crowd.

Over the past few years, American cocktail geeks have yearned for samples, but have been stymied by very small range of imports into the US. I insisted all my friends going to the Netherlands bring back a bottle, if not for me, then for themselves.

With Anchor's new product, I can stop (but probably won't) asking them to schlepp back my favorite oude jenevers (that is, "old style" genevers rather than just old ones). Apparently, a mere 700 bottles of Genevieve were released until production gets up and running.

You can be excused for not having ansinthe, Parfair Amour, or falernum in your liquor cabinet, but when you find genever of this quality and craftsmanship in the US, grab it, chill it, and serve it neat in small glasses.

Genevieve™ Genever-Style Gin is an offshoot of our research into the history and evolving production methods that led to modern gin. In the late 19th century, technological advances enabled distillers to produce neutral spirits at very high proofs. When re-distilled with complex blends of juniper berries and other natural botanicals, these neutral spirits were transformed into what we know today as modern “distilled dry gin.” The earliest gins, however—which came to be known as “genever” (or “Geneva gin,” or “Hollands gin,” or “Schiedam-style gin”)—were a very different product. To be sure, juniper berries and other botanicals are used in both styles, but 17th-century “genever” gin was distilled in primitive pot stills from a grain mash. Genevieve is our attempt to re-create this ancient and mysterious gin style. We use a grain mash of wheat, barley, and rye malts, which is distilled in a traditional copper pot still with the same botanicals we use in our modern “distilled dry gin,” Junípero Gin. We hope you will enjoy comparing these two unique products, the alpha and omega of the gin story.