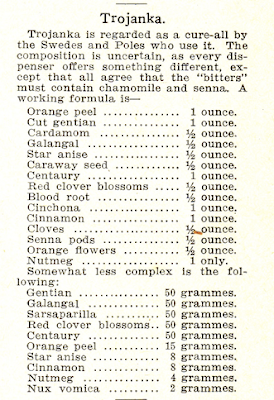 ...Applying bloodroot to the skin may destroy tissue and lead to the formation of
a large scab, called an eschar.
In spite of supposed curative properties...
internal use is inadvisable.

~ wikipedia
In my ongoing research on historic bitters, I came across a recipe (and sporadic references) to trojanka, a stomach bitters attributed to Swedes, Poles, and Lithuanians.

The recipe to the left comes from The Druggists Circular Formula Book (1915). I included the quote on blood root above (Sanguinaria canadensis) as a reminder that many of the old tonics and bitters include ingredients, such as tonka bean and snake root, that are no longer considered safe for human consumption. Nux vomica, for instance, is the tree from which strychnine is derived. This recipe, like any old bitters recipe I might write about, is purely for historic interest.

And that is about all I know (so far). I'd love to hear if anyone knows more about the history, uses, and geographic distribution of the bitters.

The company isn't far from Port Richmond, a Philadelphia neighborhood with a strong historic Polish constituency, so it doesn't stretch credulity to think that this living liquid fossil might yet enjoy some currency thereabouts. Which makes me think Chicago might be another place to start poking around for examples...

Apparently, the proprietors intend for this to be made into tea. We know better. It cries for liquor. In fact, Maryanne Laukaitis writes in the Lithuania-L archives (way back in 1999 when listserves were all the rage) that she found an old bottle of trojanka stomach bitters — “weird herbs and seeds in the pantry (I can identify nutmeg, cloves and allspice)” that was intended to be macerated in whiskey or sherry.

Anybody got leads on where/how trojanka is used and if commercial examples are available in the US?

Hi , this drink - tincture comes from Lithuania actually. Created circa about 270 years back. Originally it was made from 16 herbs and spirits. Herbs were macerated for 2 weeks in 70% spirit and than filtered and bottled for minimum 2-3 months and than one could enjoy it - NA ZDROWIE - To Your/Ours health !!!

Trojanka Litewska - is the name of this tincture. It comes from Lithuania and it is as old as ~ 270 years. No idea where to buy it in USA , but one could look also for a german version of it "Kräuter Mieke" it is based on original Trojanka. Orginal version was 16 herbs macerated for 14 days in 70% of spirit. Nowa days is 27 herbs . In Poland you can buy a set of herbs and than do-it-yourself.
Example of it:
http://darynatury.pl/offer/127/trojanka-litewska-zaprawka-do-alkoholu.html

DON'T USE , WHISKEY OR SHERRY for it !
Na zdrowie = to your/ours health