For decades, Spaniards have indulged in iced calimocha, a simple drink that is about as easy as an on-the-go drinker could want: equal parts red wine and Coca Cola. Nobody is about to win any bartending awards with this thing, but what it lacks in sophistication, it makes up for in tastiness — sweet, slightly bitter, and about 7% alcohol, but it's easy to take along to the beach, a picnic, or a fútbol game. 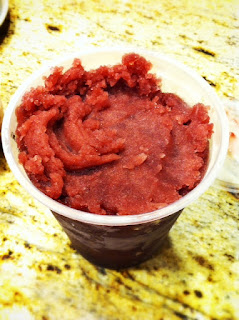 The drink is not unique to Spain and it travels under a number of names wherever one finds wine and soda. American wine coolers, for instance, clearly are in the same family. In fact, if you think of it as a sort of bare-bones, stripped-down, single-chromosome sangria, calimocha's flexibility becomes manifest.

Jake Godby and Sean Vahey, founders of Humphrey Slocombe ice cream shop in San Francisco, seem to have recognized this and have given the wine-and-cola combo a Neverland twist as a sorbet. "Michael Jackson died suddenly on the afternoon of Thursday, June 25, 2009," they write in Humphrey Slocombe Ice Cream Book. "Before his corpse was cold and the Botox wore off, we were working on a new flavor to pay tribute to the fallen icon." Jesus Juice — reports vary on the variety of wine and how, precisely, soda was incorporated — was Jackson's name for the concoction of wine and soda he favored around the ranch.

For the end of summer when nights are cool enough for blankets, but the days are hot as blazes, here's Godby and Vahey's recipe for Jesus Juice sorbet. The duo caution, however, that it may cause inappropriate touching.

In a large, heavy-bottomed, nonreactive saucepan over medium heat, combine the sugar and water and stir to dissolve the sugar. Drop in the cinnamon stick and bring to a boil over medium-high heat.


Stir in the cola, wine, vinegar, and salt and remove from the heat. Let cool completely, then cover the bowl tightly and chill in the refrigerator for at least 1 hour or preferably overnight. When you are ready to freeze the mixture, take out the cinnamon stick, transfer the mixture to an ice cream maker, and spin according to the manufacturer's instructions. Finish freezing in freezer. Stare approvingly at the Man in the Mirror. Eat immediately, or transfer to an airtight container, cover, and freeze for up to 1 week.

Goes well with:
Posted by Matthew Rowley at 8:42 AM