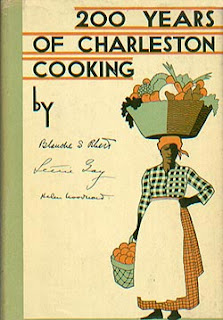 200 Years of Charleston Cooking was first published in 1930. If you were to flip through the edition in my library, you will find a recipe for homemade orange cordial using not brandy as one might expect, but “good corn whiskey.” Should you have access to a gallon of corn whiskey and the patience to gather the pith-free peelings of fifty oranges, then you are in business.

The original headnote calls this recipe “doomed to go untried.” In 1930, you see, Prohibition was still the law of the land and beverage alcohol was illegal. In spite of this, I suspect the good people of Charlestown, South Carolina wouldn’t have had great difficulty, if they were so determined, getting their hands on even as much as a gallon of corn squeezin’s.

"Take the thinnest parings of fifty oranges to a gallon good corn whiskey. Leave two months, then pour off and add a thin syrup made of two and one-half pounds of first white sugar and one pint water boiled until it commences to thicken."

Posted by Matthew Rowley at 3:58 PM