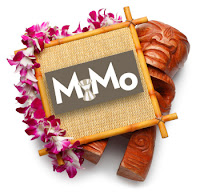 Sam Bompas and Harry Parr form the firm of, well, Bompas & Parr. Over in the UK, the two are a bit of media darlings. Even if you’ve never heard of the British duo, you perhaps have dabbled in their medium yourself. Sam and Harry, you see, work in gelatin. They have joined the ranks of those who traffic in whores, wars, fishes, and cheese. In their own words, they are jellymongers.

In a house free of children — and in possession of a full set of teeth — the preparation of quivering desserts and congealed salads made of brand-name gelatin does not occupy an appreciable amount of my time. But on rare occasions, I do use unflavored gelatin to stabilize some desserts and to make old-fashioned tea, wine, fruit, or cream jellies. 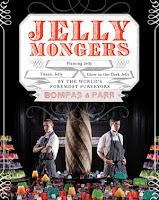 As pedestrian as the stuff seems today, there was a time when jellies were terribly fancy, palpable evidence that eaters were in the presence of wealth. To start, they were a pain to create; calf’s feet were most often called for in old recipes — hours and hours of boiling, simmering, draining, straining, and purifying (read: servants). Because jellies need to be chilled to set, one had to have either ice or refrigeration. Sure, fridges are ubiquitous now, but in 1790, 1869, or 1901, that was simply not true; great ingenuity and expense were required to get a jelly to gel in warm settings. Elaborate copper molds came into play, and shapes ranged from fanciful to downright architectural.

I’ve been pawing through the American edition of Bompas & Parr’s first book, Jellymongers, with an eye toward making a few jellies that are a step above the usual wobbly suspects. There are fresh citrus jellies, ribband (i.e., striped) and marbled jellies, gold-flecked, booze-spiked, and glow-in-the-dark jellies*.

My opportunity came when drinks writer Doug Winship offered to host this month’s Mixology Monday, the more-or-less monthly roundup of drinks on a changing theme. This month, it’s Tiki, a subset of drinks lashed with rum and laced with fresh fruit juices — and that regular readers may know is dear to my heart. 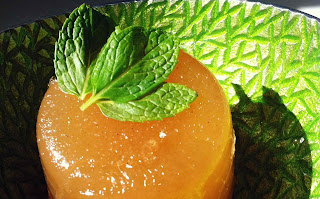 Tiki’s popularity has ebbed and flowed over the years since the 1930’s, but one of its iconic drinks, the Mai Tai, remains an immensely popular drink. Bompas and Parr know this and they’ve turned their limpid jelly eyes on that classic mid-century cocktail for inspiration. I’ve seen over the years many recipes for Mai Tai-flavored ice creams and sorbets, icebox bars, face masks (yeah, I wasn’t tempted), and more. Most of these recipes are for sweets and many of them omit an essential ingredient: orgeat.

Not these two. Their recipe includes the almond syrup called for in echt Mai Tais. For Winship’s Tiki Mixology Monday, I offer not a drink, but quivering, quavering, wobbly shapes: Mai Tai Jellies.

Bompas & Parr use 5 sheets of leaf gelatin in their recipe, but I’ve converted their recipe to one deploying Knox powdered gelatin because that's what I had on hand when Winship emailed me. The London-based duo regard the powdered stuff in a dim light and prefer the leaf version. I've also rounded off their “scant ¼ cups” to 2 ounces. Note that a thin layer of almond oil or neutral vegetable oil applied with a pastry brush to the interior of the mold makes removing the Mai Tai jelly, once set, much easier. I used drinking glasses as molds to create about 5.5-ounce jellies. One could, in a collegiate state of mind, simply make these into several one- or two-ounce jelly shots.

Sprinkle the gelatin evenly over the surface of the liquid. Leave the gelatin to soften for 10 minutes. Gently, gently heat the liquid (do not bring it to a boil), stirring constantly, until the gelatin is melted.

Once the gelatin has totally melted, pour the whole lot through a strainer and into a pitcher.

Pour this mixture into a prepared mold or glasses (see above) and set it in the refrigerator at least four hours, but 12 will give it a stronger set.

When you are ready to serve, unmold and garnish with the sprig of mint.

Next Thanksgiving, why not ditch the ribbed cranberry jelly and serve slices of these? Edit later that night: I don't usually just fire off a post here, especially one with a recipe, but time was tight and I broke with tradition in the interest of meeting the Mixology Monday deadline. Consequently, I didn't play with this recipe as much as I might normally do. Although we liked the softer set version of the recipe above, keep in mind that this is a lot of alcohol for what seems like a simple Jello-O type dessert. These would be absolutely fine as jelly shots, the purpose of which is to convey a bunch of booze at one go. Despite the inclusion of orgeat, though, one of the crucial ingredients missing here is ice. When drinking a Mai Tai, the dilution of slowly melting ice makes all the difference between a strong, boozy drink and once that soothes and relaxes. So, on a whim, one of the boys popped his Mai Tai jelly in the microwave for 25 seconds, just melting it without getting it too warm, then mixed in a handful of crushed ice. The result: a regular Mai Tai with an unexpected round mouthfeel. Next thing you know, two more glasses went in the machine. Stayed wholly liquid until the very last few sips.