Bookshelf: Zingerman's Guide to Better Bacon (and a Bacon Glossary)

Ari Weinzweig’s book on the topic holds few revelations for those well-versed in the literature of bacon — but, really now, I keep shelves of treatises on pork and have dabbled in home curing for decades, and even I admit that the very concept of a literature of bacon teeters on the cusp of a hipster enthusiasm matched only by the zeal of neophyte cocktologists. A literature of bacon? A porcine canon? 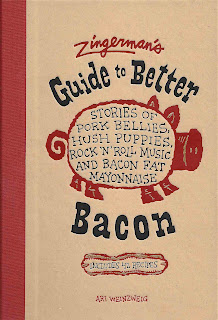 Set aside for the moment the modern mania for bacon and the question of when our taste for the stuff may begin to flag (though Weinzweig hasn’t: Zingerman's Guide to Better Bacon also comes in a limited-release cloth printing and a leather-bound version for insatiable bacon completists). The book explains, in plain and sometimes effusive language, why we ought to gush so much over well-made bacon. Not just any bacon: truly good stuff, truly made well.

Readers accustomed to mass-market bacon may wonder what all the modern fuss about pork bellies is about. I mean, it’s good, but is it that good? In short, yes. With all due deference to Socrates’ aphorism about the unexamined life, I put it to you that neither is the unexamined BLT worth eating.

For those who aren’t quite convinced of that, Zingerman’s Guide is perhaps the best introduction to bacon and the men and women who make some of what Weinzweig considers the best around. I have tasted many of these bacons, and can affirm: the people who make them know their stuff. Their firm and flavorful cured bellies put to shame grocery store claimants to the name “bacon.” 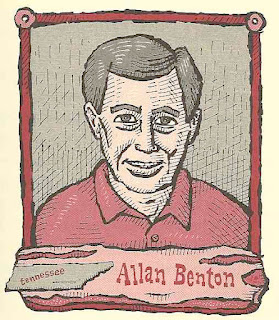 What modern bacon zealot doesn’t know of Allan Benton, for instance? He’s here, in typical humility, along with his secret for making world-glass bacon (“Well, Ari, the secret is that there is no secret. This is just the way bacon was made years ago.”). So are profiles of many of today’s working artisans; Bill Robertson from Kentucky, Virginia’s Sam Edwards, Tanya Nueske from Wisconsin, and Felix Schlosser of Arkansas who makes a wet-cured bacon flavored with long pepper, a spice once favored by Roman cooks who paid as much as three times the price of black pepper for the exotic spice.

Weinzweig goes into some detail not just on American bacons, exploring the wet- and dry-cure divide, but looks at other traditions as well, including British, Irish, and Italian species of the stuff. The book wraps up with over 40 recipes using bacon (rather than, say, making your own). Dishes include bacon fat mayonnaise (so arresting an idea it’s featured in the book’s subtitle), cheddar bacon scones, pimento cheese, grits & bits waffles, oyster and bacon pilau, and chocolate and bacon fat gravy. 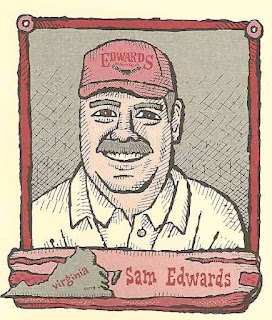 And what guide doesn’t include a degree of hand-holding? This one includes a handy gloss to deciphering bacon terms you’re likely to come across if, like me, you spend an inordinate amount of time pursuing the literature of bacon. From Ari Weinzweig’s Zingermans Guide to Better Bacon, here’s a

Bacon: Over here in the U.S., cured and usually, though not always smoked pork belly.

British Bacon: Today, this generally refers to the back and not the belly, cured in a brine solution but not smoked.

Dry Cure (a.k.a. Country Cure): Raw pork rubbed and then set into a dry solution of salt, sugar and spices (instead of a brine) to cure the pork before it's smoked.

Fatback: The strip of fat from the top of the hog's back, above the loin. Used extensively in old-style American cooking, it really has no meat on it whatsoever. In the South you'll still see places selling fried fatback. Typically used to make lard and cracklins.

Flitch: The old English word for a side of bacon.

Green: The British term for cured but unsmoked bacon.

Lardo: Italian-style pork back fat, dry-cured in slabs for months. Sliced and eaten raw.

Rashers: Slices of bacon, to a Brit.

Streak o' Lean: Like fatback, but with (at most) a small strip of meat in it. Michael Stern, writing in Roadfood, says, "streak o' lean pro- vides maximum piggy flavor. If you never can get enough bacon, it's the breakfast meat for you." Sometimes smoked, sometimes  not. Also like fatback, streak o' lean can be floured and deep-fried to make a crisp little bacony snack.

Streaky Bacon: What British people ask for when they want American-style belly bacon.

Wet Cure: Bacon that spends a good bit of time in a saltwater brine, most often, though not always, with sugar and spices.

Wide: The wide side of the pork loin as it's used for bacon—it's from further up the top loin, toward the shoulder.