The Whiskey Litmus Test in Wineries

Last week, we spent several days in and around San Francisco, including the wine country north of the city. I enjoy wine, but I don't spend as much time mulling it over as I do spirits. So, while I've never given much thought to the cultural differences between various wineries, the question was foisted on me when conversations tilted from wine to whiskey.

In Napa, we started off one morning sampling sparkling wines. It's the kind of place where busloads of tourists disgorge during the season, but the setting was great and we had nowhere to be, so we looped back around after initially passing by. Once we were seated and were making our way through the samples, a winery employee asked what we usually drink. When we replied "whiskey," she  made a face. "Whiskey? That's weird. Who drinks whiskey? Is that like a Midwestern thing?" We were a bit frosted at the putdown, so we bought nothing. 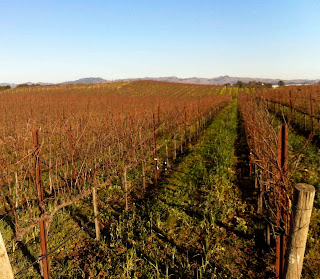 Whiskey came up at another winery (they asked what I do). Out comes a chilled bottle of Brian Ellison's white whiskey from Death's Door — smack — right on the counter.  They weren't selling it; the stuff was there to fortify the staff. At that place, we did buy the wines, including a few bottles of pinot meunier, a variety better known for blending, but its rich, lush, and almost smoky notes may appeal to confirmed whiskey drinkers. Last year I didn't know it existed; this year, I hope to drink my weight in it.

The first winery was big, corporate, a name you'd probably recognize. The second was much smaller, lesser known, most of the grapes were grown right there at the vineyard, and the staff just oozed friendliness. Turns out that regardless of whether they're selling whiskey, wine, bacon, or grits, my sympathies are almost always with smaller producers who make what they sell.

Cheers to the artisans of this world.
Posted by Matthew Rowley at 10:40 AM

Cheers to the artisans indeed.

I've never been a fan of the whole "winery tour" thing. Much like New Years Eve and St. Patrick's Day, they always seem to me filled with amateur drinkers who need a socially acceptable excuse to get smashed before the sun goes down. Not only that but they also seemed filled with blowhards as much of the wine "scene" is. But that's just me.

The new issue of Wine Spectator has a cover story and numerous other features on American Whiskey (collective gasp)!

Interesting parallel: my wife and I were visiting several tasting rooms in Los Olivos, outside of Santa Barbara. She drinks a lot of wine, me, not so much. We were checking out one particular winery that had been recommended, and at a minimum, everything about their presentation was fantastic. The building, the signage, the print quality of the labels, everything was polished. One of the owners, the guy who does the "farming", if that's what you call it, was behind the counter pouring.

My wife had several tastes that she deemed excellent. The owner asked why I wasn't tasting, and I mentioned that driving and also not particularly knowledgeable about wine. Like your situation, he asked what I normally drank, and it came out that he and I are both big fans of rye whiskey.