Ted Munat and Michael Lazar have gathered some of our favorite western bartenders in a new, revised edition of Left Coast Libations. What? Missed the first edition, you say? Not surprising — the 2008 booklet had a small run and limited distribution. How limited? Ted handed me a copy personally at Tales of the Cocktail last year. (Aside: Just one of the reasons we like Tales: five days in seminars, lunches, dinners, workshops, and afterhours shenanigans and I know what you’re going to be drinking this year. And next.) 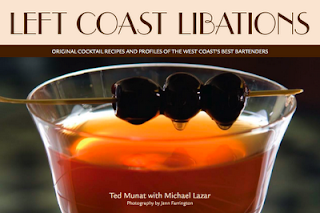 Left Coast Libations is at once serious and ridiculous. It’s a serious look at 100 original cocktails, the bartenders who created them, and where to get them in the field. No Jack-n-Coke recipes, but you will find directions for making the kinds of syrups, tinctures, bitters, purees, juices, and other house-made liquids and foams one actually finds in many bars today. The recipes are informed as much by culinary trends as classic cocktail culture.

The book is a less serious look at the bartenders themselves.* Munat heckles almost all of them. Mercilessly. When writing bartender bios, Munat seems to have followed the dictum that lies reveal truths more than facts do — and outrageous ones apparently drive to the very heart of truth. Each has the ring of an HL Mencken hoax. Even through the teasing, there’s clearly a lot of well-deserved love and respect for the men and women crafting original drinks. Just…verify anything you read about their backgrounds in those pages.

How are those drinks? I’ve had the pleasure of sitting at many of the bars in the book and the recipes here reflect the complex, bold, and bitter flavors that predominate today. No Vodka Red Bulls or Jell-O shots; as Munat writes in his intro for Seattle bartender Tara McLaughlin “Rob Roy had fallen into the DJ/Jäger/VodkañRedBull Zone. And hey, don’t knock till you try it, is all I can say. But that’s not what we’re here to learn about today.”

I'll be spending a lot of time with this little tome over the next few months. In the meanwhile, here’s floral and spicy little number from Tara McLaughlin called the Gin Anthem. Hold the Jäger. 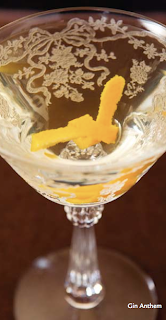 Stir all the ingredients with ice. Strain into a cocktail glass. Garnish with the orange twist.

The authors note that McClaughlin prefers Pacific Distillery’s Voyager gin for this cocktail.

And Erik and Blair will be there, no doubt, since both are now tending bar regularly (a requirement to be in the book, and a change from the first editions, which included bloggers and other writers such as Paul Clarke, Robert Hess, Marleigh Riggins, etc.). Note that both were in the first edition.