If we don’t eat them, how are we going to save them?
~ Poppy Tooker
Sure, surviving New Orleans’ annual Tales of the Cocktail takes a defiant liver, iron kidneys, and a healthy dose of prudence. But the Crescent City’s liquid offerings aren’t all that require heroic constitutions — its pervasive sweets are anything but trifling.

Since Katrina, the obscure little fried cakes known as calas have undergone a revival. Definitely a fritter, arguably a donut, and with a lineage that reaches back to Africa, calas are little wads of rice held together in a custard-like batter, deep fried, and — more often than not — dusted in confectioners’ sugar. 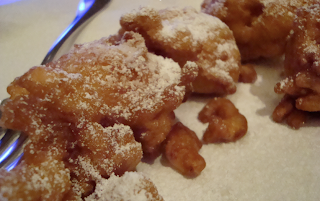 A street food, calas were sold by women of African descent, but by World War II, they had become less common. Enter food preservationist Poppy Tooker who, as head of Slow Food New Orleans, championed the little fritters and who continues to make them in cooking classes and demonstrations. Savory versions do pop up on local menus and in Louisiana cookbooks now and again; the WPA-era Gumbo Ya-Ya listed calas made of cow-peas and modern chef Donald Link makes a version with corn. But hot, sweet calas are what you’ll most likely find.

This is a very flexible recipe. Once you bite into a cala, you realize that it’s not unlike deep-fried rice pudding. Then, suddenly, you understand that it practically begs to be tinkered with. Cook the rice in water? Yeah, you could do that. You could also cook it in milk. Or coconut milk. Lighten the batter with yeast, give it an overnight ferment, or use the more modern baking powder. Season with vanilla and nutmeg? Why not? But…what about cinnamon? Soak currants in Old New Orleans Rum, and fold them into the batter. Make the batter, chill it, cut it into cubes, and then fry? Sure. The end result won’t necessarily be 100% authentic, but it might be pretty damn tasty.

Here's Tooker talking about calas (recipe below the video)


Here’s a version I put together that combines recipes from Tooker and historian Jessica Harris. It yields about 18-20 calas.

Combine the rice through nutmeg in a large bowl. Add the beaten eggs and vanilla and gently mix into a homogeneous mass.

Heat oil to 360-375°F. Working with two large spoons, make loose balls of batter from heaped tablespoons (about the size of a ping-pong ball). Drop each one as it’s made into the hot oil, being careful not to splash. Fry until golden brown (or darker, for a more pronounced crackle). Drain on paper towels and dust them with confectioners’ sugar like you're trying to hide a crime.

Eat them as soon as you can stand the heat.

Posted by Matthew Rowley at 2:42 PM

I should cross post this comment from Facebook. Ronni Lundy writes: "Hate to toot, but there's a recipe for Bel Calas in Shuck Beans, Stack Cakes and Honest Fried Chicken circa 1990, I do believe. I think I might like yours better, Rowley, and I'm in for fermenting just about anything."

Also, San Diego aspiring chef Lee Lozano argues that an 8-hour fermetation is the way to go. There are a host of older recipes that call for exactly that that.

These were before the beignets i believe.

Haven't tried these (yet), but they bring to mind the street food proffered by rotund, imposing ladies in pastel-tinted old Salvador. Hmm, caiparinha anyone?