Hunt for a Pork Shoulder

This week my in-laws are visiting from the Midwest. We’ve laid in beers, a bit of wine, and have planned out an itinerary that includes San Diego highpoints such as the USS Midway, the Birch Aquarium, a wild animal park, and Balboa Park’s botanical garden. While all that’s going on, I’m cooking.

Oh, there’ll be fish tacos and meals overlooking the ocean, but at home, I’ve got an 11-pound pork shoulder ready for some slow, slow cooking. Who knew it’d be such a pain to find an entire pork shoulder in San Diego? Now, I didn’t exhaust all my usual meaty haunts, but I did put about 20 miles on the car before finding a cut that will do.

The Chinese and Vietnamese markets I frequent had pig — admittedly large pieces, but not large enough — at great prices. Two carnicerias had decent pork, but not full shoulders. Costco did have enormous pork shoulders, but deboned, without skin, and sealed in Cryovac. Meh. Bone helps deliver heat to the interior of large cuts for more even cooking and it gives better flavor. Boneless pork was out. And skin? Oh, the skin’s destined for crackling, sort of British oven-made chicharones.

I finally found the shoulder Supermercado Murphy’s. For those who are neither Irish nor Mexican, let it be known that the two peoples have great affinity for one another and names like Supermercado Murphy’s make all the sense in the world. Murphy’s caters to a largely Mexican clientele and so has all kinds of great meat, heavy on pork, chicken, and beef, many of them marinated and yearning for the grill. The butcher spoke no English, so my dodgy Spanish came into play:

"¿Esta?" pointing to another.

"Más, más grande." He pulled out a shoulder fully 50% larger with beautiful layers of fat.  "Sí," I confirmed. "¡Qué linda!"

If this works as I suspect it will, the recipe will come later and Murphy's will become my go-to place for shoulders. If not, this is the last you’ll hear of it from me.

In the meanwhile, though, note well their bulk chorizos. One may — with some effort — distinguish between pork chorizo and beef. 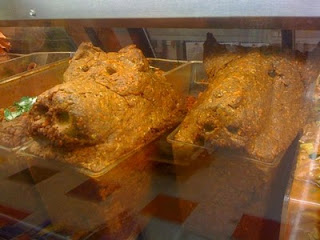 Huh, I didn't even know some made Chorizo with Beef.

Not just beef ~ in Baja, it's sometimes made with seafood, too. I've heard of — but haven't yet had — stingray chorizo. I would eat that in a heartbeat.

Oh, my. I do hope the dish is a winner and that you'll share the recipe! Although, how big is your oven? (Something tells me it's double the size of my little French one). And the insane chorizo sculpture? Exquisite.

How is it that I've missed this place?

Trid ~ Get your tail there. And your trotters. They might even have entire cabezas that they'll split for you.

Tammy ~ the oven is typical American (e.g., huge compared to petite French ones). It's 18x23x16". You could fit a microwave oven, two pillows, and a sack of kittens in there. Though tonight, I'm making shortcakes. Strawberries are in, you see.