Ten Speed Press has released an American edition of Pam Corbin’s The River Cottage Preserves Handbook. For five days, it barely left my side. 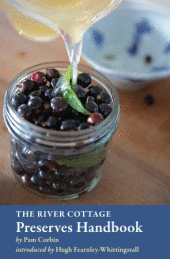 I toted it in my briefcase and in my backpack. I brought it out at coffee shops and flipped through it before bed. A handbook in the truest sense, the small book fits in my (admittedly oversized) hands, but contains a wealth of information about pickling, candying, putting up, and otherwise preserving ephemeral produce. Although not a bartenders’ guide by any means, its sensibilities about capturing seasonality in glass speak volumes to modern cocktail enthusiasts.

Originally a British title, the current incarnation has a few odd moments with measurements — as do most European cookbooks adapted to the American market. Understand that "1.1 pounds" of an ingredient was originally "half a kilo" and the recipe flows more easily. Measuring that pesky 0.1 pound exactly then becomes slightly less imperative.

The Handbook contains the usual recipes one finds scattered throughout other books on preserves. It has, for instance, recipes for fruit butters, for chutneys, herbal vinegars, marmalades, jellies, jams, and pickles of various sorts. For those who just can’t keep booze out of the kitchen, there are syrups, sloe gin, elderflower cordial, sage elixir, and a rummy shrubb or two.

Clearly, Corbin knows her subject well and has brought together dozens that would otherwise take some research to unearth. Many show an experimental stamp on otherwise venerable recipes with plenty of riffs on basic ideas. With a solid discussion of what makes good preserves and how to stave off spoilage, it’s a book I’d recommend to beginners as well as advanced preservers. As Fearnley-Whittingstall puts it in the introduction, “…she will show you the ropes and then give you the reins.”

The book’s recipes evoke homey and comforting memories of foods that perhaps we’ve never even eaten, but wish we had, all infused with Corbin’s pragmatic take on making the most of one can — there’s even a Compost Heap Jelly recipe, using up apple scraps and citrus skins. Oh, hush; it’s little more than a strained marmalade. Like many River Cottage recipes, however, it does make one pause to think about untapped potential for eating well.

For the first time in years of living in Southern California’s nearly eternal Spring, I found myself wistfully musing over seasons, almost – but not quite – missing the changing of leaves, the onset of cooler nights, and Winters huddled inside, bundled up against the cold, with a pot of tea and jars of my own lemon curd and jams to remind me of the Summer that had past and which will yet come again.

Of course, my senses returned to me and I’m reminded that we do not “enjoy” distinct seasons as other parts of the world. I don’t have to draw close the shutters and light a fire to enjoy a pot of tea and my own lemon curd, nor is it necessary where we live to put up foods as talismans against a harsh, barren Winter. But I do it anyway. Making my own preserves, my own chutneys, marmalades, and jams somehow does allow me to feel as if I am laying in protection against hard times. Even if everything else goes South, I seem to think to myself, we will never go hungry. As God it is my witness and all that.

In a less reflective moment, I admit that I just like the taste of my own preserves. Inspired by the book, I have indeed made, among other things, new batches of lemon curd. Last week, four pounds of blueberries transformed into two sheets of fruit leathers. Following Corbin’s general instructions, it was simplicity itself.

The European beech (Fagus sylvatica) is a separate species from the North American F. grandifolia. Haven’t tried a drink made from either, but Corbin offers a take on an old French cordial I’ve written about before.


Pack beech leaves into an earthenware or glass jar until it’s about nine-tenths full. Pour the gin over the leaves, making sure they are well covered (they will oxidize and turn brown if exposed). Let steep for 7-10 days so the leaves can release their striking green pigment. Strain the infused June through cheesecloth or a jelly strainer bag.


Put the sugar and 1 cup of water into a saucepan and heat gently to dissolve the sugar. Allow to cool completely or adding to the infused gin. Add a couple of capfuls of brandy too.


Put a couple of fresh beech leaves into a sterilized screw-top or stoppered bottle, then add the noyau and seal.


Wait for a cold winter night, then partake of this potent liqueur. Use within years (it may darken in color over time).


[1] It was a barren stump when I moved in. I was all set to experiment with thermite stump removal when a few hints of growth caught a friend's attention.

Trid ~ let's do it. In addition to a Caesarean crown, I have other uses for fresh bay: a quince compote with fresh laurel can be pretty amazing. And there's a lemon-bay syrup I make for our pancakes and to drizzle on buttermilk cake. But I'm thinking perhaps some syrup and/or pork experimentation is in order.

May I horn in on this chat? I have a huge laurel tree, and I am curious about how the syrup's made (an extended steep?) and what you could use it for. Because my tree just stands around waiting for me to make summer wreaths, or pork.

Horn away! It's a simmer, actually ~ throw in an entire lemon (minus pips), and all) chunked into small pieces with sugar, water, bay leaves, and cloves or cinnamon. Tell you what: I'm running low on the syrup. I'll do a writeup on it with the complete recipe. Not much harder than making a pot of tea.

Thanks Matt, sounds great! I've been off-radar for a bit, summer heat and festivities, loss of camera, etc, etc. I'm back and looking forward to your write-up--when you're not off-radar, swamped with your own summer doings, that is.