It’s a stretch to say that William S. Burroughs was a friend. But back in the 90’s the writer and I were neighbors in Lawrence, Kansas. Matt Dillon, Allen Ginsberg, and Hunter S. Thompson showed up now and then and the novelist Scott Heim was kicking around town at the same time. No, Bill and I weren’t friends, but we knew each other and on rare occasions chatted over dinner. 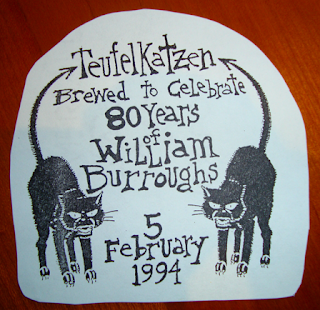 As thanks for his hospitality, I made a special beer — Teufelkatzen — for his 80th birthday. Later, I found bottles and labels of Teufelkatzen in bars, in peoples’ homes, mementos of spending time with him. Bill never drank the beer I made for him, but he did pass it around. I even heard third-person stories of the private brewer who only made beer for Burroughs. A bottle of that stuff, I was told, was only for people he liked and trusted.

By the time I knew him, the crazy-ass junky was history. The mischievous old man with an avuncular smile whom I came to know had a fondness for guns and cats. His afternoon tipple was as questionable as a syringe of junk, though: vodka and flat Coke.

I found the recipe today, along with my sole remaining copy of a label, in an old file. Haven’t made it in years, but for the first time ever in print, here is the recipe for William S. Burroughs’ birthday beer. In the mid 1990’s, I was still making extract brews, so it’s an easy recipe.

But the crushed crystal malt in a brew bag and add to 1.5 gallons of cold water in a boiler. Bring to a boil. Remove the grains and add the malt syrup and Northern Brewers hops. Boil for 45 minutes. At the 43 minute mark, add the Cascade hops.