With San Diego temperatures plummeting to the mid-60’s, I can’t help but recall our decade in Philadelphia where—to make it through the harsh winters—I guzzled hot tea by the liter. Occasionally bits of Spanish fig cake helped. But it isn’t just for tea. As a bar snack or part of an appetizer spread, fig cake complements Manchego cheese, a slice of membrillo, and a small bowl of olives. It doesn’t hate a glass of sherry or port if you roll that way.

Now fig cake isn’t your typical baked cake like red velvet or a pound cake; it’s a dense little drum of dried figs mixed with Marcona almonds or sometimes hazelnuts. Done properly, it’s not overly sweet since there’s little more than figs and nuts in it. Mitica makes a popular version and Zingerman’s sells chucks of the stuff.

But there’s also a way to make it at home with no cooking at all. 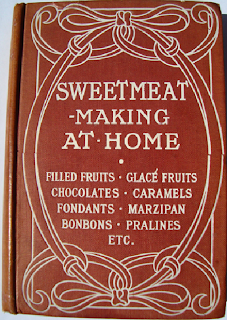 The little brown tome bearing Alan Davidson’s fishy bookplate I picked up for a measly $30 from Bonnie Slotnik*. The Treat inside it was a dead ringer for the fig cake I knew back East.

This recipe calls for fresh bay leaves to be inserted between layers of the cake. It’s not just a matter of taste. Old importer guides and grocer manuals report that bay leaves packed in bundles of imported figs helped prevent insect infestation. Layer some in if you have access to fresh bay and like the taste. Dried sounds…unappetizing. Ignore Mrs. Rattray’s suggestions of gilding this particular lily with sugar.

Split some fresh-dried figs of the best quality, “pulled figs” [see below] by preference, and arrange in each three or four split blanched almonds; close the fruit and put it in layers in a screw tin, such as a small brawn tin, or into a jar in which increasingly heavy weights can be put; between each layer put a few fresh bay-leaves; when the whole mass is perfectly solid, the pressure having been daily increased, lift it out and cut into slices with a sharp knife. These may be formed into the basis of a sweet, dusted with icing sugar, and decorated with royal icing.

Mrs. M. E. Rattray (1904)
Sweetmeat-Making at Home.
C. Arthur Pearson, London.
Pulled figs note: Since this is (at least) a 105-year old recipe from a British source, I hit the shelves to see what the Brits would have meant by “pulled figs” just as the 20th century was getting its sea legs. According to The British Pharmaceutical Codex (1907),

“Natural" figs are those which are packed loose and retain to some extent their original shape. “Pulled" figs have been kneaded and pulled to make them supple; these are usually packed into small boxes for exportation, and are considered to be the best variety. "Pressed” figs have been closely packed in boxes so that they are compressed into discs.

Snip off any remaining stems regardless of which kind of dried figs used.

*I’ve scored a few of Andy Smith’s discards from Bonnie as well. Few trips to New York are complete without a stop in her little used cookbook store. At least not when you’re a book geek like me.

Nice to run across your blog!... Just bought some of this pre-made Mitica at Whole Foods.
I had a few slices with some goat blue cheese and a glass of pomegranate wine -- fabulous!!!
Can't wait to try out this recipe...
Thanks!
Catherine

Good to hear from you. Goat blue cheese, eh? That wouldn't be Harbourne, would it? We used to get that from DiBruno Bros in Philly. As I recall, the stuff's about $40/lb, but fantastic even in small doses. I can see where something like that would go very well with this.