In Thai, bai nai means "Where are you going?" For my friends Barry and Rebecca, who have spent some time in Thailand and just married last month, the common greeting seemed a fitting name for a drink to mark their wedding day.

Since this month’s Mixology Monday's theme is ginger, it’s doubly fitting. More than that, maybe: Matt "Rumdood" Robold is hosting MxMo XL: Ginger this month, so it'll be worth checking in later in the week to see what cocktail recipes have been delivered to his door. The Bai Nai punch uses ginger syrup as well as falernum, a Barbadian syrups flavored with cloves, lime, and other ingredients, including ginger. 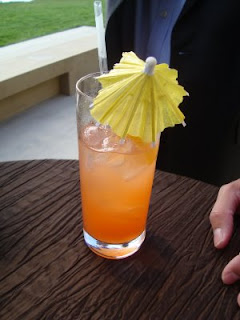 The drink is particularly suited to large gatherings such as weddings, pool parties, beach outings, or backyard cookouts. The recipe for the Bai Nai—based on Dale DeGroff’s Perfect Passion from his 2009 book The Essential Cocktail—yeilds a single serving. The syrup recipes that go into it, though, have large yields because they are particularly versatile. While I like DeGroff’s original recipe with its muddled ginger, strawberries, and lychees, it would have been a monster hassle to make it one drink at a time for 180 guests. Instead, I scaled it, made some substitutions, rejiggered the measurements…and added an ingredient.

Lychees provide an exotic but elusively familiar element—the taste is something like table grapes, but clearly not just that, and the aroma is unmistakable (once you know what it is). To give the recipe an additional lychee flavor and aroma boost, I added a small amount of Soho, a lychee liqueur imported by Pernod Ricard. Use it with a light touch—it's tasty, but it doesn’t take much to be too much.

Shake with ice. Strain into stemmed cocktail glass. Garnish with a paper umbrella anchored with an orange slice.

Bring the water almost to a boil in a pan. Add ½ cup to a blender with the ginger. Process briefly to shred the ginger. Rinse out the blender with the remaining hot water, then transfer the ginger mixture back to the pan. Bring the mixture to a boil, then reduce the heat to a simmer and add the remaining ingredients. Leave at a bare simmer for an hour (do not boil). Let cool and strain.

Wash and hull the berries. Add them with the lychees to a large plastic container. Add half the simple syrup and roughly chop with an immersion blender. Add the remaining syrups, cover, and let sit overnight in the refrigerator. Strain.