A Bit of Seed Cake

Knock around old American and English cookbooks and household manuscripts for any length of time and you’ll come across recipe after recipe for seed cake. Not poppy seed cake, mind you; that still has adherents. Rather, I mean a decidedly more old-fashioned seed cake, dating to at least the 17th century, in which the nutty, musty, vaguely anise-like smack of caraway infuses the whole thing. 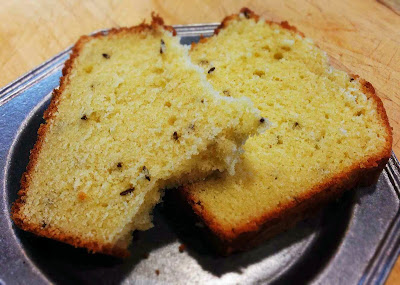 Yeah, yeah. You’ve had caraway in rye bread, maybe sauerkraut, goulash, or some cheeses. It’s integral to the taste of a Reuben sandwich, but those are all savory. It’s out of place in a sweet, right? Look, if you hate all those things, then skip seed cake; it might be caraway itself you don’t like. But if you do like them and just had never given any thought to sweetness and caraway, give it a try in cake.

Not just any cake, though. Not fancy, multi-tiered, extravagantly decorated cakes. Simple. In fact, the old recipes are essentially pound cakes with a small amount of caraway tossed in. I can’t quite emphasize that enough: a small amount. Poppy seed cakes sometimes call for so much of the blue-black seeds that they look as if someone dropped slices into a cinder pile. A caraway seed cake, on the other hand, should have a light scattering of seeds (fruits, really, but we call them seeds) peeking out of each slice. A teaspoon — at most one and a half — is enough to flavor a three-pound cake.

When I made a loaf yesterday, I overcooked it a bit when I was pulled away by a phone call from a UK distiller — the edges are a bit crusty, but the interior remains moist. Keep a closer eye on your cake than I did mine. And maybe turn off the phone.

Hundreds of recipes are available from the past several centuries, but contemporary chef Fergus Henderson of the London restaurant St. John has got a bit of reputation for his version which he pairs with a glass of Madeira. Me? I take mine with hot black tea.

Grease a 16 x 10 x 8cm loaf tin with butter and line the base and sides with baking parchment.

Cream the butter, sugar and caraways together either with an electric mixer or in a bowl with a wooden spoon until they are white and fluffy. Gradually mix in the beaten eggs, adding them little by little to prevent curdling. Then sift in the flour and mix until incorporated. Lastly add the milk.

~ From Fergus Henderson and Justin Piers Gallatly (2007)
Beyond Nose to Tail: A Kind of British Cooking Part II

Goes well with:
Posted by Matthew Rowley at 10:13 AM

I would much rather have the British editions. Do you know if Nigel Slater's Notes From the Larder is just the re-titled Kitchen Diaries II?

Exactly right; it's Ten Speed's American edition of Kitchen Diaries II (originally published by Fourth Estate). If you've already got the British edition, I wouldn't bother with the American. Still, though — if you haven't got it at all, pick it up.