George Orwell on Picking Hops in the English Countryside

One can talk and smoke as one works,
and on hot days there is no pleasanter place
than the shady lanes of hops,
with their bitter scent—an unutterably refreshing scent,
like a wind blowing
from oceans of cool beer. 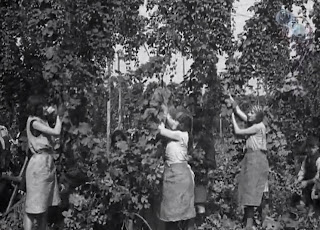 I've been refreshing my memory of Eric Blair's work lately in preparation for a talk in Denver next month. Blair's novels (writing under his better-known pseudonym George Orwell) include 1984 and Animal Farm, but I've been diving into his more ephemeral essays on language and meaning. While digging though the library, I stumbled across an early essay of his on picking hops in the English countryside. In it, Blair tests the idea that a seasonal worker, wanting to get away from London for a bit, might high-tail it to Kent and make a decent bit of income stripping hops from vines for the English brewing industry.

The squalid camp conditions, dishonest measurers, and exploitive owners, however, left Blair realizing that hop picking, as practiced in early 20th century England, was a wretched experience. "What keeps the business going," he wrote,


...is probably the fact that the Cockneys rather enjoy the trip to the country, in spite of the bad pay and in spite of the discomfort. When the season is over the pickers are heartily glad—glad to be back in London, where you do not have to sleep on straw, and you can put a penny in the gas instead of hunting for firewood, and Woolworth’s is round the corner—but still, hop-picking is in the category of things that are great fun when they are over.

His full essay is here.

A 1929 silent newsreel from the archives of BFI shows families, including children, harvesting hops from right around the time Blair wrote Hop-Picking.

Oh Rowley, the more we read you the more we love you! It is so fun to find a man who loves moonshine and Orwell.

Love. Well. "Have an affinity for" perhaps. It's not all historical texts and literary pretension around here. Keep in mind that I'm an imbecile — I also like watching Aqua Teen Hunger Force cartoons, making milkshakes for my lactose-intolerant friends, and, erm, practicing voices. You know: in case I ever go back into radio work. But thank you; I'm glad someone other than me likes this Whiskey Forge.

You can add me to your list of fans too. You had me at HP Lovecraft, though posting about George Orwell certainly won't make you lose me as a fan.

I'm working on a new project now, Randall. It's a solid booze thing and won't be ready until next year, but there's a tenuous HPL connection. You may like it. Details to come.

Chiming in with Rowley appreciation!