An austere morning here at the Forge: hot tea, a single small biscuit, and catching up on the news of the world while the rest of the house slumbers. There will be no egg hunt, no chocolate bunnies, no jelly beans, no squeals of young children. It's perfect. 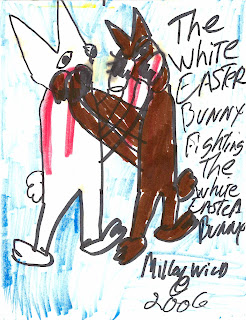 While reading the latest from Germany, I suddenly remembered (for this is how my parenthetical mind works) a box of drawings I have from Philadelphia's punk rock legend, Mikey Wild. When I wrote about his death almost a year ago, I wrote about his drawings in particular:


Almost childlike in their simplicity, Mikey's drawings could be also dark and revealed an impish sense of humor. He sold the drawings on paper for as little as a dollar each or as much as ten. I have a folder stuffed with them.

Turns out that I have not merely a folder stuffed with them. When moving to our new house, I discovered a box labeled Michel Sauvage. What the hell was this? On opening the box, I was faced with a drawing of Jesus drinking moonshine and realized, as I flipped through all the loose pages underneath, that I'd come across a forgotten trove of his drawings. 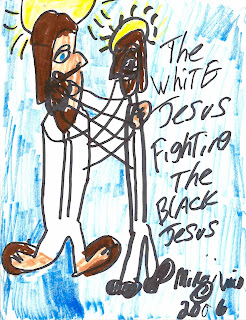 For this Easter morn, I offer two additional Mikey Wild drawings: The White Jesus Fighting the Black Jesus and The White Easter Bunny Fighting the White Easter Bunny. Hey, that's how Mikey titled them. I like that there may be multiple Easter bunnies duking it out for supremacy. Likewise, a multiplicity of pugilistic Jesuses opens entirely new vistas of possibility. And why are they fighting? No idea. Knowing Mikey, though, I wouldn't read any racist angles into it. I'd venture that black/white, good/bad, and, yes, even white/white are simple binary oppositions — why wouldn't they fight?

Goes well with:
Rabbit à l’Epicurienne, an Easter Treat— from last Easter, a Victorian bunny treat from Agnes B. Marshall. Who's Marshall? She's just the one who was writing about making and using ice cream cones almost two decades before their supposed invention at the 1904 St. Louis World’s Fair and who suggested using liquid oxygen at making ice cream at the table generations before anyone heard the term molecular gastronomy.
Posted by Matthew Rowley at 7:55 AM

You must not know anything about Jesus. I can nearly promise you your mother does not approve this picture. Unless she is insane, then I can guess were you got it from. btw to you: Your drawing stinks. I am a nice person and christian so I don't harshly cyber bully,but you surely know the word in which your drawings display in racial events.

I shouldn't even take the bait, but here goes:

Wrong on nearly all counts. My mother — who once traveled to Rome for an audience with the Pope — enjoys Mikey's drawings.

I myself was raised in the Church and educated by both nuns and Jesuits who demanded a rigorous and scholarly study of Christianity.

My own sanity — like your professed niceness — is neither here nor there; the drawings exist whether one likes them or not. And check the text again; these aren't my drawings. They're Mikey's. Or were, rather, before he died.

As much I'd like to respond to this: "you surely know the word in which your drawings display in racial events"...your mounting illiteracy, typographical errors, and grammatical mistakes finally confound me. I simply can't respond to gibberish and I can't make out what meaning you intended to convey. If you'd like to take another run at it, go ahead.