"How about Vincent Price?"

"Aw, Mikey, I've got lots of Vincent Prices. What else've you got?"

"I could draw...I know: Dick Cheney Shooting His Friend in the Face with a Shotgun. You'd like that!" 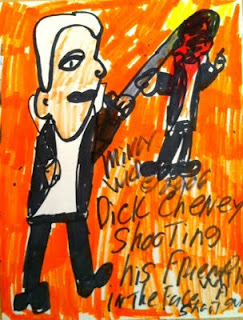 Mikey Wild. You couldn't spend much in the Italian Market or on South Street in Philadelphia without knowing who he was. He seemed as much a part of the place as Independence Hall or the Liberty Bell. Short, perpetually unshaven, he smelled of cigarettes and coffee even at the earliest hours. His gravelly voice and slightly slurred speech set some on edge, but I didn't mind. I have speech problems of my own. He was forever walking the neighborhood, friendly to almost everyone. Often, he carried a satchel of colored markers and paper for making drawings of whatever sprung to his mind.

It was something of a shock to read in yesterday's news: Michael A. DeLuca, 56, a punk rocker, artist, and South Street institution known as "Mikey Wild," died of lung cancer Wednesday, May 25, at Penn Rittenhouse Hospice in Philadelphia.

Philadelphia sommelier Ben Robling had sent me a message letting me know the news. The formal obituary merely confirmed it. 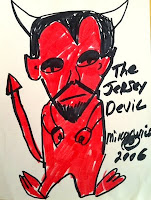 Philadelphians across the city and the world must be pulling out their Mikey Wild drawings and paintings now and polishing their memories of him. Almost childlike in their simplicity, Mikey's drawings could be also dark and revealed an impish sense of humor. He sold the drawings on paper for as little as a dollar each or as much as ten. I have a folder stuffed with them.

One depicts Satan biting the head of the Easter Bunny. But there are others: the Good Easter Bunny and the Bad Easter Bunny Fighting. It hadn't occurred to me that there might even be a Bad Easter Bunny. There was also a bad Jesus boxing good Jesus. A ship crashing into an iceberg is labeled The Titnic, one "a" forever lost to the freezing waters. I cannot to this day see a reference to that doomed ship and not think of it with a smile as the Titnic. 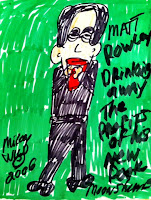 On a green field in another, there I stand, a cup to my mouth. Matt Rowley Drinking Away the Profits of His New Book Moonshine is the title. I remain amused that the profits can be downed in a single cup. The Jersey Devil was a childhood fear of mine, so Mikey gladly — gleefully, even — drew his version of the Pine Barrens legend. 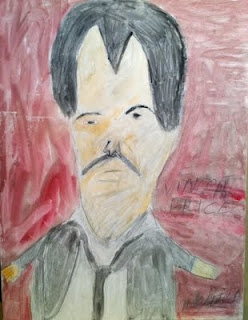 Mikey and I shared an admiration for Vincent Price, whose 100th birthday would have been today. The actor was a recurring meme in Mikey's work; if he pulled out a folder with 20 drawings, Price would be there. When Mikey brought around a large canvas one morning of his favorite actor with an enormous head, I paid him on the spot. $20.

It was worth every penny.

Happy birthday, Vincent. One of your biggest fans is on his way to meet you.
Posted by Matthew Rowley at 11:52 AM