I spent this last weekend in and around Appleton, Wisconsin, about three hours north of Chicago. Work-related, but there was time enough to explore the area, check out local restaurants, bookstores, liquor stores, bars…and bakeries. 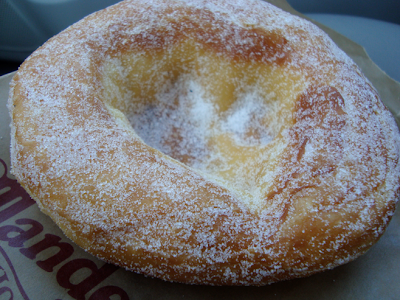 So when I dropped by Manderfield's Home Bakery in nearby Menasha, I expected some of the bakeshop treats of my youth. Many were there, naturally. But also paczki, fried doughnuts that, while new to me, are probably old hat to anyone who grew up within driving distance of Chicago’s substantial Polish communities.

Paczki (pronounced in those parts “poonch-key”) are tacitly Catholic raised donuts generally available only from Fat Tuesday until Easter. They are often filled with fruit or, sometimes, cream. Some are glazed, some dusted in sugar. Others have no coating at all. And—get this, boozehounds—vodka is sometimes incorporated in the dough ostensibly to keep it from absorbing frying oil. I’m not sure I buy the story at all. Well, the rationale, anyway. Seems like temperature control would keep the oil in check. I’ll defer to the judgment of bakers on the effect of vodka in donut dough.

Since the bakery sells filled paczki only on Fat Tuesday itself and I was engaged elsewhere that day, I walked away with an unfilled version dusted simply with sugar. Where you’d expect a hole in a common American raised donut, each of Manderfield’s paczek has a flat, crisp disc covering one side, something like a tire's hubcap.

Sitting in the car, I cracked open a window to let in the smell of sugar and vanilla that swirled around the parking lot. Pulling apart the donut and cracking though the little crisp disc, I sent a cascade of sugar crystals down my black pea coat. I don’t need paczki every day, but I’ll make a special effort to be near a Polish bakery the next time Mardi Gras rolls around. And by next Lent, I'm going to get the bottom of this vodka thing.

Love the post, Matthew. I remember eating pączki all the time as a boy. My grandmother worked in a bakery in New Britain, CT, Polish capital this side of the Atlantic. Thanks for making me remember the days when I didn't have to worry about how many donuts I ate at one sitting. As far as vodka is concerned, we know how it makes food taste better, but I love the notion that using it in the batter makes the dough cook faster because it evaporates more quickly. Cheers!
-Paul

Ahhh ~ An intriguing idea. I like it. ETHOH would indeed boil off more quickly than water, but frying temperatures (say, in the neighborhood of 350F) are above the boiling point of both water and ethanol, so I wonder what difference the inclusion of vodka would make. Clearly, some believe it makes a difference, so experimentation and meticulous note-taking is in order. Thanks, snobby!

Paul ~ Glad I could stir up some memories. Our family has some tenuous connections to greater Polonia, but somehow baked goods never came into the equation. Now I'll be reaching out to see if anyone's cooking them at home or if pączki seem to be primarily bakery goods.