There aren’t but a handful of good books on American moonshine. Most are flawed by romantic notions and half-understood hearsay, of things heard, but never seen or done. Restrict your hunt to those written the last quarter century and you’re left with two—only two recognize that the “dying art” take on illicit distilling no longer holds water.

The first is mine. Go ahead and buy it here.

The second is Max Watman’s Chasing the White Dog: An Amateur Outlaw’s Adventures in Moonshine. 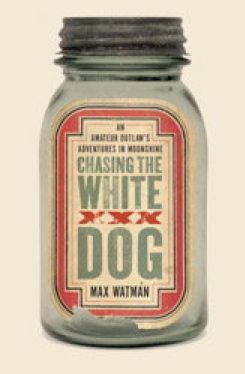 As a character in Watman’s book (see his chapter on hobbyist distilling), clearly I can’t be said to be objective. And we will let pass for the moment his suggestion that I be waterboarded to gain a broader understanding of who is who among American home distillers. He’s also a friend. That doesn’t mean that we should dismiss my admiration of his work. Max Watman clearly knows his liquor. Until I read his book, I hadn’t realized he’s a hell of a writer, too.

Chasing the White Dog briefly traces America’s well-known early history of illicit distilling, then dives into Watman’s own discovery of what moonshine is, how it’s made, and what it might become. In the process, he visits unspeakable dives where vile potations may be purchased and wedges himself into a racecar as he gets a grip on NASCAR’s connection to 20th-century moonshine.

I like to concentrate on small distillers trying either to make great products or doing interesting technical things with stills—essentially those making for themselves and their friends and family. Watman spends a great deal of his book on modern outlaws in the business of illicit liquor whose quality is more suspect.

He visits law enforcement types and sits in on trials, visiting with defendants and prosecutors alike. Moving away from suspect sellin’ whiskey, he hunkers down with distillers such as Jess Graber (who makes the particularly fine Stranahan’s Colorado Whiskey) and Rory Donovan, co-founder of Peach Street Distillers, whose peach brandy is a sheer delight. In talking with these craft distillers, he gets a sense of the aspirations of modern American distillers, whether they’re operating in the open or in basements and garages.

If fact, Watman documents his own attempts to make liquor at home. From his first flawed experiments with George Washington’s rye whiskey to the creation of his own bespoke applejack, and his encouragement of others to do the same, Watman walks us through his false starts, his romantic notions, and, finally, his realization that making liquor at home should be no more illegal than making wine or beer. Bravo, Max.

Max Watman is a corn liquor Dominick Dunne, a literate, funny, and insightful apostle of bespoke liquor and homemade applejack. Like any jury-seasoned moonshiner, he claims his liquor-making days are behind him. Whether or not one chooses to believe that, let's hope his writing days are far from over.