Between Tucson, San Diego, and Los Angeles, I put over 1,000 miles on the car last week. Others might have been tempted to take in gorgeous mountain scenery and stunning sunsets. Me? It’s already gorgeous where I live and I can see the mountains from a block away, so I ditched the scenery to take in some of the West’s more unnatural and surreal sites: Tiki bars. Well, two old tiki bars and a massive California warehouse that supplies bars like them across the world.

Hell, I was driving anyway, and who knows when I’d be in the neighborhoods again? 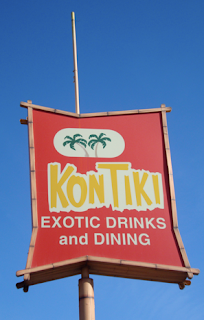 These faux Polynesian retreats, relics from another century, bring me back to a past that, in actual fact, I never knew. By the time I was in grade school, tiki bars—with their carved idols, puffer fish lamps, exotic drinks, indoor waterfalls, and outrigger canoes suspended from ceilings—had grown tatty and embarrassing. I wasn’t even old enough to go into one, but I was pretty sure that I didn’t want to. Despite a recent renewal of interest in Polynesian pop culture, people still talk of “umbrella drinks” with haughty disdain.

But there’s something so charming about the few that still exist that it’s hard not to cross their thresholds and be whisked away to another more simple time and place. As a 21st-century drinker, this isn’t the South Sea island paradises envisioned by drinkers 40 and 50 years ago—it’s America of 40 and 50 years ago itself. Sitting at these bars, one gets a sense of what it may have been like for our parents and grandparents escaping their humdrum everyday worlds into a tropical paradise that, while it may have been utterly fake, was easily accessible.

Some of those places have remained open for longer than I’ve been on this Earth. Since I would be in the neighborhood, it was time to check them out. First up was the Kon Tiki in Tucson. The Kon Tiki (no relation to Stephen Crane’s popular Kon-Tiki restaurants from a half-century ago) has been dishing up and pouring tropical wonderment since 1963.

After a hands-down fantastic stack of flapjacks at Matt’s Big Breakfast in Phoenix, I’d hit the road and headed south. Pulling up at 11:30am in an otherwise nondescript old strip mall, I was dismayed to see that a large old carved tiki outside the place had been defaced with white spray paint. Manager Louie Lazos explains that the tiki—an original by master carver Milan Guanko—had been vandalized several months ago and that, while tagging is a problem in Tucson generally, this was still a shock. The tiki had been set alight once before by partying fraternity boys and this latest vandalism was making him rethink keeping it outdoors.

“We may have to bring it inside, restore it, and just keep it safe,” he mused. “Maybe we can find someone willing to donate time to carve a new one.” 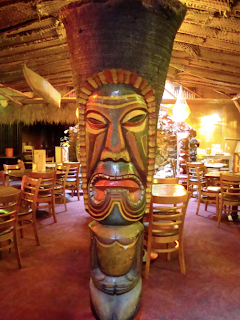 Inside, past the heavy red doors and their “Welcome to Paradise” sign and the notice that, pursuant to A.R.S. §4-229, firearms are forbidden inside, thoughts of vandalism melted away. Once my eyes adjusted to the permadusk of a tiki interior, I was amused to find a band of regulars encamped at one end of the dark bar. Back lit by a huge fish tank on one side and the playpen of Thor, an enormous monitor lizard, on the other, the retirees bantered as only drinking buddies do. The air was thick with inside jokes and Kelly, the bartender who knew their drinks without even asking, gave as good as she got whenever one of the duffers got raunchy. My kind of bartender. 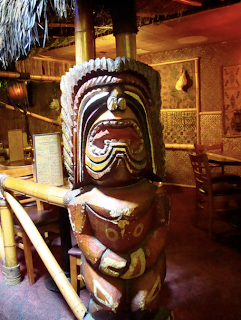 I settled on a scorpion which, even half-sized rather than the usual bowl, was a seriously big-ass drink. I put on my nursing shoes and nursed it as long as I could while I snapped pictures, witnessed a few bartender tricks, and ordered up one more.

I’m not quite ready for 11:30 am drinking with the old-timers, but if I lived in Tucson, I’d haunt the Kon Tiki. The next time I pass through, I’ll make it for happy hour.

Next up: the Los Angeles leg of the trip, including my first bit of tiki décor, a frightening long pour of tequila, and beefy manliness.