There are just some things that male writers, of a certain ilk, feel they have to do. I call it the Curse of Hemingway. We have to like to fish. We have to be proficient in blowing birds from the sky with shotguns. And we have to love oysters. We have to sit around a table in some sun-blasted shack on some desolate, mosquito-infested cay and slurp ’em right out of the shell.
Your First Oyster
~ Rick Bragg
You’ll never see me with People or Us magazines, but find me on a plane and you may just catch me toting one of my favorites: Garden & Gun. Since I tend not to work in transit, planes are where I catch up on reading for fun and studying the craft of some damn good writing.

Garden & Gun regularly features food and drinks stories. After all, being Southern entails an appreciation for both. The above quote is from the current G&G’s six-part A Southerner’s Guide to Oysters in which Rick Bragg, Robb Walsh, and others consider oysters—what they are, where to get them, and how to cook them. Justin Devillier spikes Oysters Bienville with Angostura bitters, Edward Lee whips up a mess of cornbread oyster dressing, and Linton Hopkins uses Anson Mills Antebellum fine yellow cornmeal for frying the little suckers. 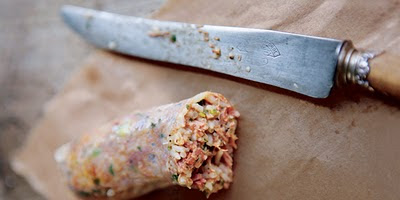 In the same February/March 2010 issue, Joe Bargmann writes on a quartet of Kentucky bourbons and PJ O’Rourke applies dog-training concepts to child rearing in Fetch Daddy a Drink (“It goes without saying that the idea of Seeing Eye kids is wrong—probably against child labor laws and an awful thing to do to blind people.”).

John T. Edge is a frequent contributor, as is Roy Blount, Jr. and roving New Orleanian Pableaux Johnson. You’ll find stories by culinary historian Damon Lee Fowler and boudin junkie Sara Roahen. Funny, insightful, sometimes poignant, the writing is treat. Get yourself a subscription or check it out online.