I know the bronze blocks exist throughout Berlin, but still — to come across a cluster of Stolpersteine unexpectedly after lunch recently was an arresting and gut wrenching counterpoint to the pleasant meal. Stolperstine are the work of Cologne artist Gunter Demnig and each commemorates an individual killed by Nazis. Most of the dead are Jewish, but some named were Gypsies, homosexuals, and political undesirables. 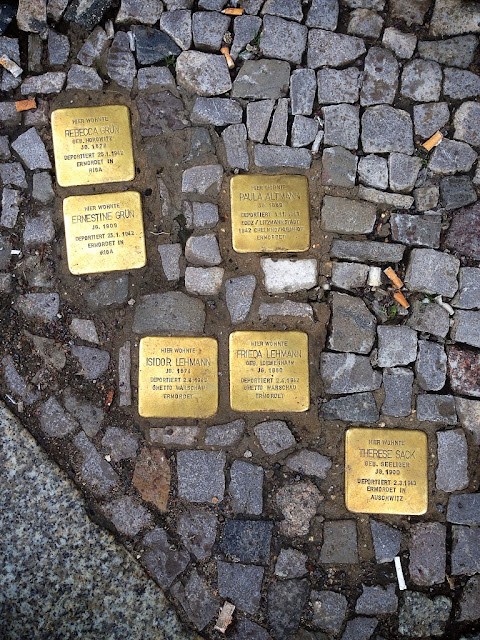 In Smithsonian Magazine's blog, Lois Gilman writes "More than 12,000 such stones have been installed in roughly 270 German towns and cities since Demnig hammered the first brass blocks into Berlin's sidewalks in 1996." Each denotes who lived at that address, when they were born, the date they were taken away, and what happened to them. "Deported to the Warsaw Ghetto." "Murdered in Auschwitz." "Murdered in Riga." And, simply, "Murdered."

Even trod underfoot and littered with cigarette butts, the names of the dead still have the power to take one's breath away.

Posted by Matthew Rowley at 9:45 AM