Bookshelf: The Sovereign People are in a Beastly State

Inishowen swarms with private stills
and an active person is necessary
to suppress them.

At almost 300 pages before the index, Aiden Manning’s 2003 account of illicit distilling in Donegal, a single Ulster county perched in the very northwest of Ireland, is a work of love. Or possibly an historian’s obsession with liquor and those who make it in secret. His densely packed and thoroughly annotated pages are underscored by tales familiar to those who follow moonshine narratives in America—killings, beatings, corrupt police, high-minded reformers, and clergy whose sermons railing against local distillers may in fact be fueled by the products of clandestine stills. 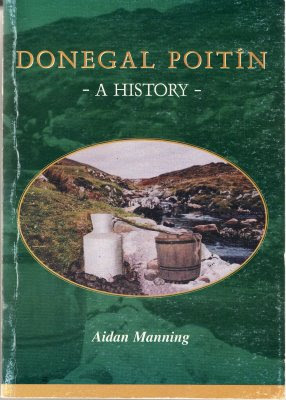 If the stories are somehow familiar, it is no doubt because Ulster, that province so rife with strife for hundreds of years, hosted an ingrained culture of smalltime distilling. Many Ulstermen (and women) who migrated to Pennsylvania in the 18th century subsequently migrated south along the Appalachians, where mountain distilling took on a distinctly Irish cast that continues to this day. Even the distilling vocabulary of Irish poitin-makers aligns with that of American moonshiners. Those interested in Appalachian distilling would do well to look to its Irish antecedents and parallel developments: Donegal Poitin fills the role nicely.

Manning looks at the products of private distilling (that is, poitin or Irish moonshine) from its early years through the 1850’s when Ireland’s revenue police disbanded and the aftermath of a series of famines diverted official attention from the matter. He reviews in meticulous detail evolving legislation against poitin as the Irish try to come to grips with the moral, economic, and theological ramifications of endemic private distilling.

For most of the period he covers, illicit distilling truly was endemic and startling, given the number of small stills seized, destroyed, and sometimes put to use by shady revenue agents. To back up his claims about the ubiquity of illegal distilling, Manning taps voluminous records of revenue agents, governmental ministers and magistrates, and court officers as well as old deeds and private accounts from the National Archives of Ireland, Trinity College, the British Library, and other venerable collections. It is, admittedly, sometimes dry reading.

But stick with it and an image emerges of centuries-old battle of wits between those who would uphold revenue laws and seemingly every man, woman, and child in the county hellbent on either making or selling whiskey. Manning’s first words, in fact, are “I am deeply indebted to illicit distilling, as without it, I would probably not exist.” His father, a Garda (or policeman), had been sent to Connemara to suppress poitin-making while his mother was there to teach knitting as an alternate skill. We are fortunate that their efforts to quash the practice led to a damn fine celebration of it.

Despite the charts and facts and figures, Donegal Poitin is indeed a celebration of the Donegal people distilling barley, sometimes oats, and very rarely potatoes into spiritus loci. Distilling kept the Ulsterfolk through all but the hardest of times and, despite crushing poverty, Manning paints many locals as (mostly) honest people beset by corrupt revenue agents spurred on by poorly-planned and special interest-sponsored legislation.

Herein, revenue agents are not villains per se: as in America, local constabulary are often portrayed as sympathetic to distillers’ needs while poorly-paid officers dispatched from other areas widely lacked such sympathy and often turned to bribery, thuggery, and sometimes outright murder to earn what they could. The 1830’s reforms enacted by Colonel William Brereton cut almost 2/3 of the revenue police as incompetent, corrupt, and more of a danger to the populace than the distillers they were charged with to put down. Though the revenue police disbanded officially about twenty years after this, the professional code of conduct Brereton established greatly improved the respect such officers commanded—at least when they were within sight. The light of the moon may have revealed an entirely different story.

A Whiskey Forge review of John McGuffin’s In Praise of Poteen.
Posted by Matthew Rowley at 3:02 PM